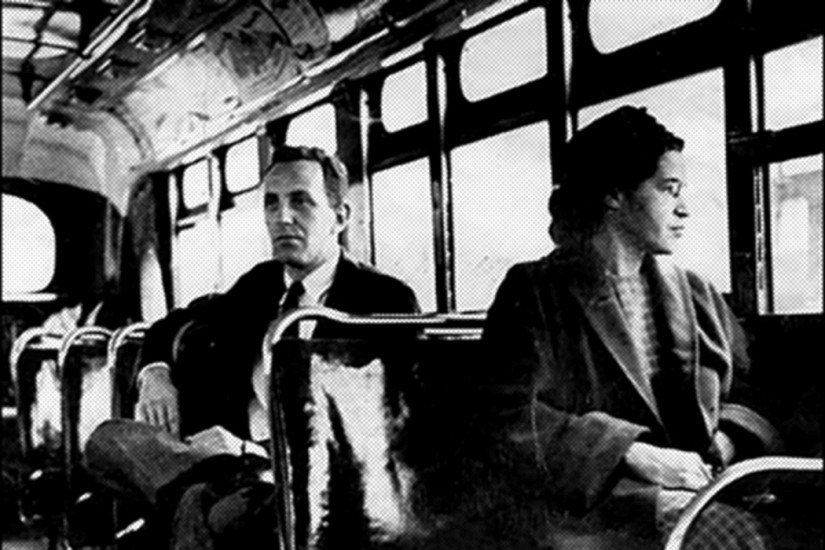 Rosa Parks on a Montgomery bus the day the system was integrated.
Library of Congress

The photo has become emblematic. Rosa Parks is sitting on a Montgomery, Alabama, bus. In a seat behind her is a white UPI reporter. She is meticulously dressed, sporting a hat common among stylish 1950s women. She stares out the window, seemingly oblivious to the camera. It is the first day that the buses in Montgomery are integrated.

Just a year before, on December 1, 1955, Parks, a 42 year-old seamstress and household domestic, shook the world of Jim Crow by refusing to give up her seat to a white man on her way home from work. She was arrested for her act of defiance and eventually paid a fine. A bus boycott, inspired by her the events and led by a young preacher named Martin Luther King Jr., eventually succeeded with the help of a federal lawsuit.

Parks became the mother of the Civil Rights movement. Upon her death in 2005, she became the first woman to lay in state at the U.S. Capitol Rotunda. Her funeral in Detroit attracted political luminaries, including Bill and Hillary Clinton. Political liberals and conservatives of all races lionized her, affirming the legend that Parks’ singular action, an individual standing up to American apartheid, broke the back of legal segregation and oppression.

As with most historic iconic legends, the historic reality, however, was more complicated.