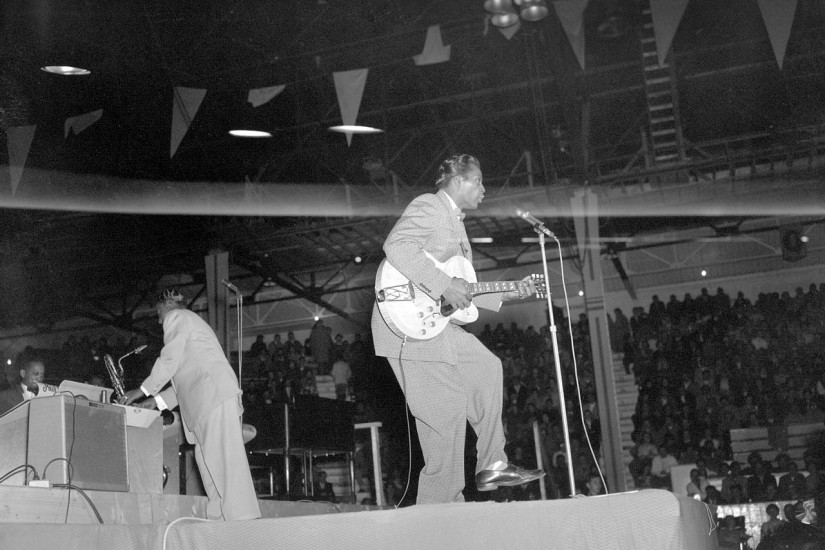 Chuck Berry performs at &#34;The Biggest Show of Stars For ’57&#34; concert in Edmonton, Alberta.
Provincial Archives of Alberta

In the Fifties and Sixties, black performers found themselves on the front lines of the battle over segregation. The clashes at lunch counters, schools and on buses have been well documented, but reporters weren't exactly covering James Brown club shows back then, so we're reliant on survivors' biographies and oral recollections for the details. As the original rock & roll pioneers are fading out – Fats Domino died in October, Chuck Berry died at 90 last March, 84-year-old Little Richard has been intermittently sick, and most of the members of groups like the Flamingos are gone – it's more important than ever to share their stories.

Rock & roll, with its mixture of white country music and black R&B, arrived just as segregationists were tightening Jim Crow laws in response to the civil rights movement. Entertainers throughout the South were forced to participate in a crowd-separation ritual. Venues could be unofficially classified black or white – New Orleans' famous Dew Drop Inn catered to an exclusively African-American crowd, for example. But in other cases, police and promoters physically separated the audiences. Sometimes, as in the Flamingos' show, blacks were in the balcony and whites on the floor; other times, a painted line ran down the center of the theater or a rope bifurcated the audience.

In 1955, Berry performed at the Duval Armory, in Jacksonville, Florida, and recalled in his autobiography, "Just before they were to open the doors for the spectators, four of the maintenance guys came out and roped off the armory with white window cord. They looped and tied it to each seat down the center aisle, making it an off-limits zone that neither colored nor whites could tread." Berry also wrote that he once showed up for a Knoxville, Tennessee, concert only to find a group of white men had replaced him with a local cover band: "It's a country dance and we had no idea that 'Maybellene' was recorded by a niggra man," one said.