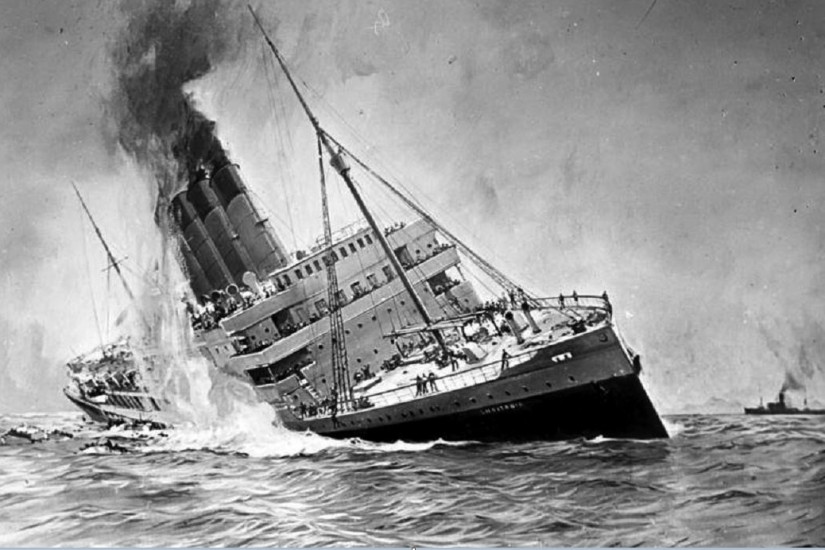 A painting showing the sinking of the Lusitania by a German U-Boat in 1915.
German Federal Archive/Wikimedia Commons

A century ago, a 30-year-old passenger on the Lusitania named Minnie Campbell was minutes away from going down with the fast-sinking ocean liner, which had just been torpedoed by a German U-boat, when a Cunard Line employee pushed her into one of the last lifeboats launched into the Atlantic.

“You’re just a tiny thing,” the seaman supposedly told the young Scot as he flung her into the nearly full lifeboat. From that boat Minnie watched the Lusitania slip beneath the frigid water off the coast of Ireland, killing nearly 1,200 people.

Adamina Campbell, my great-grandmother, was tiny, at under 5 feet tall and less than 100 pounds. It’s a good thing she was so small, we like to say in my family, because it seems to have helped make her one of the 763 people who survived the infamous sinking.

The British passenger ship Lusitania was completing a transatlantic crossing from New York harbor to Liverpool, England, when it was struck on May 7, 1915. The ship sank in just 18 minutes, hitting the ocean floor 8 miles from Ireland. The brazen attack against a civilian ship outraged Great Britain, already in the midst of fighting the Germans, and it shocked the United States, too—128 Americas were among the dead. It’s widely believed that the sinking of the Lusitania paved the way for America’s participation in the Great War, although that wouldn’t come about for another two years.

“I can scarcely realize yet that I was in the disaster at all,” Minnie wrote in a letter to her brother on May 14, one week after she made it off the ship. That letter and another longer one that Minnie wrote days later are prized possessions in my family. The paper on which they are written is brittle and Minnie’s cursive handwriting faded, but when I read them, I can picture my great-grandmother boarding the ornate and imposing Lusitania in New York City on May 1, 1915