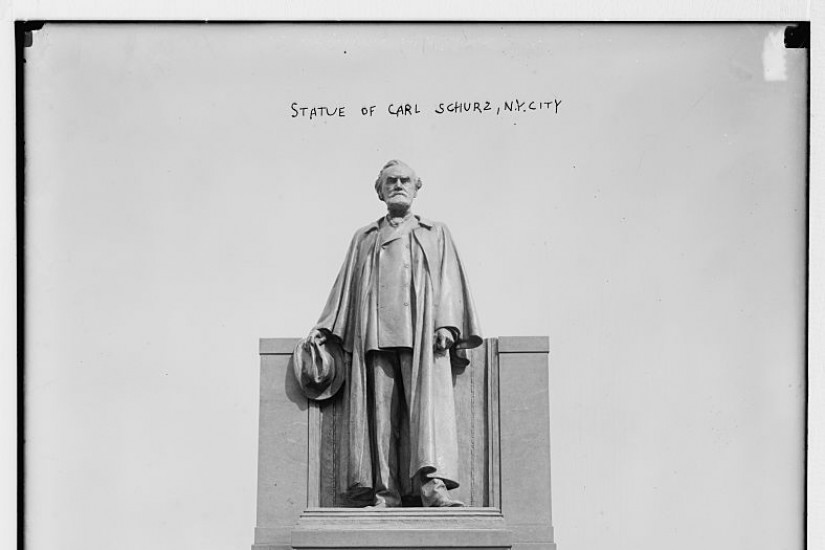 Carl Schurz died a hero in 1906; plans to build an elaborate memorial to him in Morningside Heights began immediately. The dedication ceremony was in the spring of 1913. It didn’t occur to the people who could get monuments built back then that Schurz’s change of heart about Reconstruction might have been been mistaken. Ideas about the biologically determined ordering of the races were almost universal among the gentry of the day, and those who held them thought of themselves as benign in their intentions. One of the bas-reliefs flanking the statue of Schurz shows a Roman-style soldier breaking chains that bind a barely clad black couple. The image was clearly intended to reinforce the human-rights theme of the monument, but in the twenty-first century it’s inescapably offensive.

We are in a moment of binary attitudes toward people who rise to the level of being enshrined in statuary; either they are paragons or they have to go. Because Schurz is now obscure, and because he doesn’t fit into an easy-access category of disapproval—he was a Union general, not a Confederate general—he makes for a tough call, if you’re accustomed to thinking about monuments as denoting simple heroism. Schurz played a meaningful part in getting slavery abolished, and, later, he played a meaningful part in taking civil rights and voting rights away from African-Americans. By our lights today, he’s neither a good guy nor a bad guy, and elements of the monument that seemed progressive when it was dedicated don’t seem progressive today.

In the case of the monuments to Confederate generals in the South, the strong argument for their removal is less about the generals themselves than about the intention behind the memorials, which was to send the message that Jim Crow was a noble cause. They were built as monuments to a system, and the evils of the system make removing them a good idea. In the case of the monument to Schurz in Morningside Heights, the intention was most likely to celebrate his association with the replacement of patronage hiring with the civil service. That’s neither especially stirring nor especially problematic today. So one is left to evaluate Schurz’s statue in terms of Schurz himself.

The problem is that almost no long-ago white Americans’ views on race pass muster today.