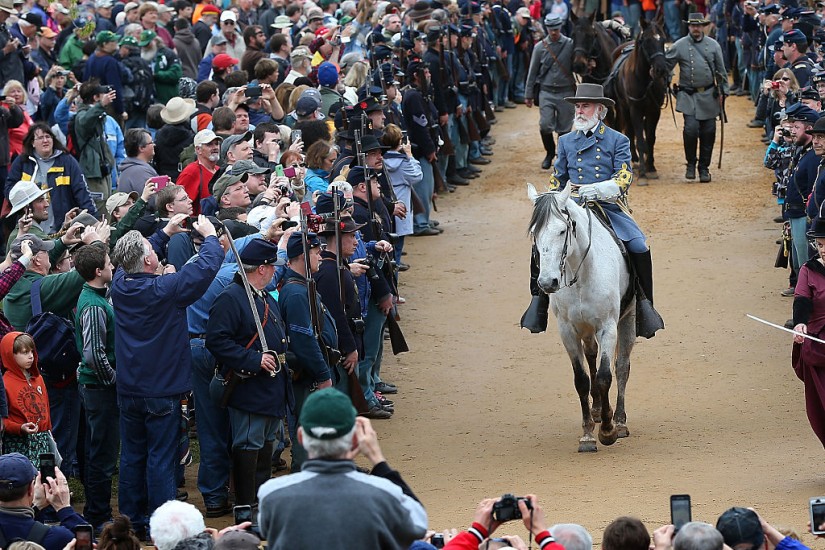 A re-enactor portraying General Robert E. Lee rides through columns of spectators after a re-enactment of the surrender of the Army of Northern Virginia to Union General Ulysses S. Grant at the Appomattox Court House National Historical Park, April 9, 2015.
Win McNamee/Getty Images
…

It’s a damp, cloudy April afternoon on a muddy industrial park in Appomattox, Virginia, and—clad in the grays, golds, and reds of his Confederate officer’s uniform, Bill is giving me a short soliloquy on the joys of re-enacting America’s past. “I’m bringing history to life,” he said. “You bring the subject to life, you bring your ancestors to life—you’re honoring the ones that came before us. And that’s what I’m all about. The honor of them, whether they fought North or South, is what I’m all about.”

For him, and many of the men gathered in the camps and on the re-created battlefield—made more authentic by regular rifle fire, thick smoke, fields of homemade tents, and copious horse shit—the Appomattox anniversary weekend was a capstone to four years of constant activity and a celebration of the beginning of the end of a conflict that savaged the human landscape of the United States. Thousands had gathered in the small Virginia town to mark Robert E. Lee’s surrender to Ulysses S. Grant and commemorate the point where Americans stopped fighting and started the long, hard work of reuniting (and re-creating) their nation. Despite separate camps, there wasn’t animosity between Union and Confederate re-enactors. They ate their meals together, rode their horses together, and even mugged for the camera together when “Abraham Lincoln” came on the field. “We’re all friends again,” said the Lincoln re-enactor after taking a photo with two soldiers.

But missing in this remembrance, and in the audience as well, were black Americans. Of the thousands of re-enactors and thousands more spectators, only a handful were black. And while this may seem minor (or worse, a needless invocation of race), it’s a terrible disadvantage. The real Appomattox wasn’t just about reunion; it was about emancipation as well. Hannah Reynolds, an enslaved woman, was wounded during the battle of Appomattox, the victim of cannon fire. But while she was injured a slave, she died a free woman, three days after Lee’s surrender.