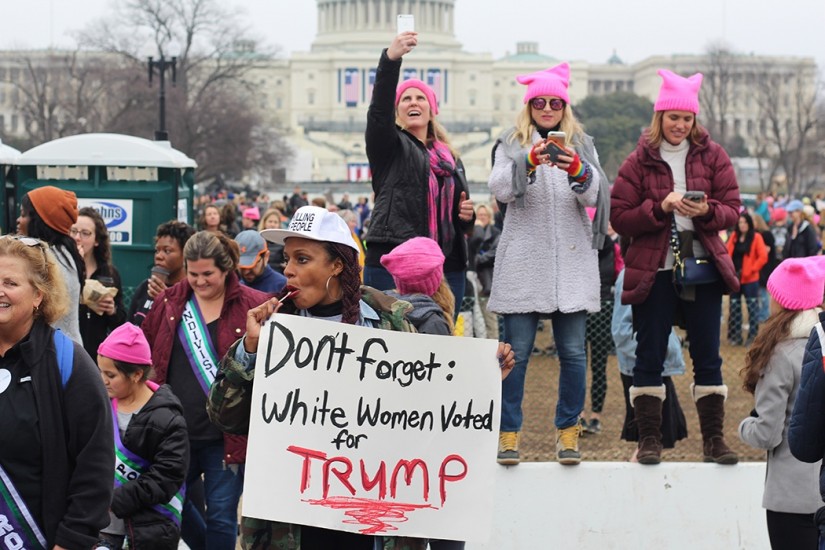 For many, a single photo defined the Women’s March on Washington: an image of three blond, texting white women standing behind a woman of color who holds a sign that reads “Don’t forget: White women voted for Trump.” The viral image sums up the concerns that the largely white march appropriated the labor of black women. Though the photo’s subject occupies the foreground, she is, in effect, hidden from the other, white participants of the march—an experience that is echoed by the ways in which black women were erased from early Women’s Studies.

V.P. Franklin looks at women “hidden in plain view:” black women who were initially ignored and made invisible by the nascent Women’s Studies movement. Though they were bedrocks of the Civil Rights, Black Power, and student movements of the 1950s through 1970s, African-American women experienced overwhelming sexism there. “However,” writes Franklin, “the masculinist posturing virtually endemic to Black Power groups did not necessarily push African American women into the expanding ranks of the Women’s Liberation Movement”—nor into its academic offshoot, Women’s Studies.

The founders of Women’s Studies were overwhelmingly white, and focused on the experiences of white, heterosexual women. Their views contributed to their erasure of other women. Liberal feminists thought that “equal rights” would automatically uplift everyone and so never addressed the diverse concerns of different groups. Meanwhile, socialist radical feminists focused on economics as opposed to race.

When black women spoke out against white women’s claims that they spoke for all women, they were met with hostility. Franklin tells the story of Barbara Omolade, a political activist who helped organize a groundbreaking women’s history retreat in 1979 that helped birth Women’s Studies. Within six months, she resigned due to racism she called “pervasive, subtle and devious,” turning every day into “a battleground … ."