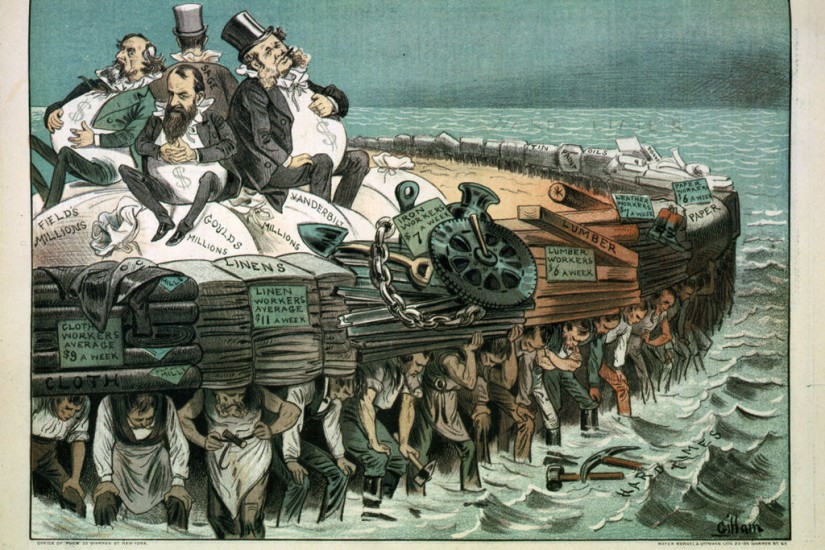 A political cartoon showing four leaders of large companies sitting on bags of &#34;millions&#34; while being carried on the backs of workers from various industries (1883).
Bernhard Gillam/Library of Congress
…

By the time growth returned in the late 1980s and 1990s, the slow retreat of the socialist alternative had turned into a rout, as Communist regimes collapsed across Eastern Europe and the Soviet Union itself dissolved. Despite the return of domestic economic growth and rapidly increasing levels of inequality in the United States, the lack of a credible alternative form of political economy meant that the right-wing pushback against redistribution only intensified in the 1990s. Whereas Reagan in the 1980s had admitted that Social Security reform was the “third rail of American politics,” by the 1990s the GOP was making the roll back of Social Security an only semi-secret part of its long term plans. Likewise, with the collapse of the socialist alternative, the idea of flat income tax went from being a fringe idea to the central pillar of Republican Steve Forbes’s presidential campaign in 1996.

In the end, however, U.S. conservatives over the past generation have turned out to be much better at cutting taxes for the rich than at dismantling the U.S. welfare state for the poor. From the early 1980s down to the present day, taxes have been successfully cut on several occasions—usually just as soon as a new GOP administration takes office—but welfare programs have not been cut back much. The one major exception was Democratic President Bill Clinton’s dismantling of Aid for Families with Dependent Children—“the End of Welfare as We Know It,” in his notorious phrase—which reduced the number of people receiving cash assistance from the government from more than 13 million in 1995 to just 3 million today. But otherwise most welfare programs have been preserved and, in the case of health care, significantly extended, for example through the Medicare Modernization Act of 2003, which provided subsidies for the costs of prescription drugs and prescription drug insurance premiums for Medicare beneficiaries, and through the Affordable Care Act (Obamacare) of 2010.

This historical preamble brings us to the present tax bill, which as of this writing has just been passed by the Senate, and is now in the process of reconciliation with the House version of the bill.