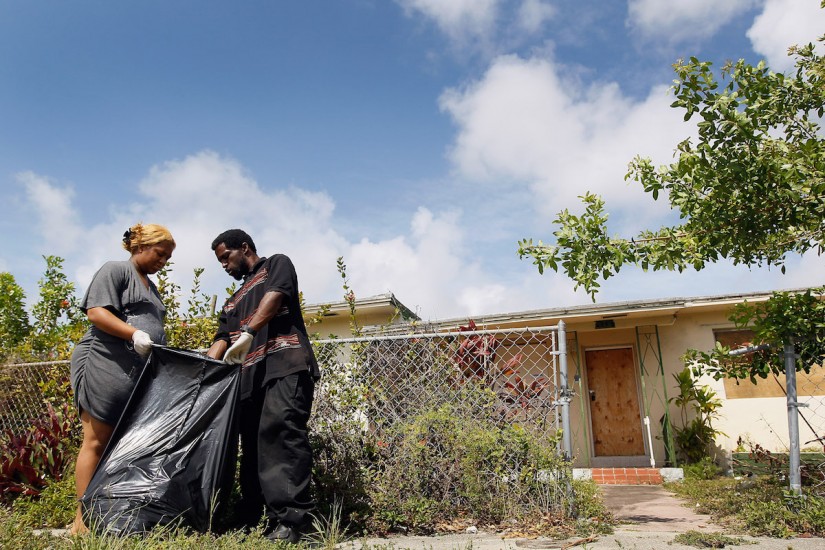 Angela Daniels and Michael Daniels help clean up in front of a foreclosed home in Miami's Liberty City neighborhood on May 3, 2012.
Joe Raedle/Getty Images
…

With the threat of prosecution and taxation, the administration could have forced banks and servicers to accept genuine relief for underwater homeowners.

Then–Federal Deposit Insurance Corporation chief Sheila Bair had another good idea: simply force the banks and servicers to write down to face value any underwater mortgage that was more than sixty days delinquent.

But the administration did not pursue that idea either.

Instead, they let homeowners suffer as Wall Street returned to racking up enormous profits.

It is impossible to say with any certainty what the precise effects of a sensible housing policy would have been. But it unquestionably would have prevented a huge fraction of the wealth destruction detailed above. The overall housing crash would have passed much sooner — even in 2016 the rate of foreclosure was higher than it was in 2005.

No political obstacle stood between President Obama and a better housing policy. On the contrary, his heavily bank-slanted policy cost the Democrats dearly: mass foreclosure, and the associated economic wreckage, is a large part of why his party was crushed in the 2010 midterms.

Because African Americans were disproportionately victimized at all levels of the housing and foreclosure crises, they stood to gain the most from better policy. But because Obama’s approach failed cataclysmically, the first black president in American history turned out to be a disaster for black wealth.