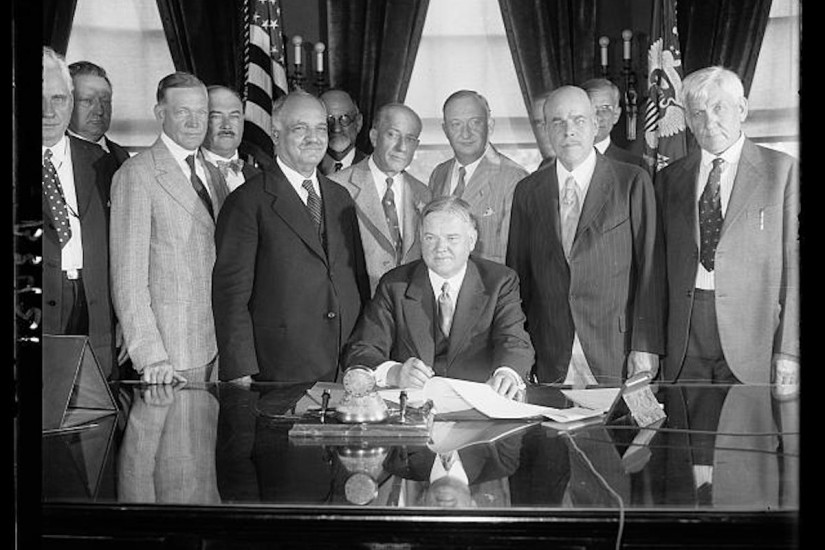 President Hoover signing the Farm-Relief Bill at the White House which provides for a $500,000,000 revolving fund to stabilize agriculture markets. (1929)
Harris and Ewing/Library of Congress

Shortly after President Trump took office, House Speaker Paul Ryan could feel just how close he was to finally achieving the goal he and his party colleagues had dreamed about for decades. With Republicans in uncontested power in Washington, he tweeted, they had a “once-in-a-lifetime opportunity to enact real comprehensive tax reform and get our economy moving.” Many Trump supporters thought reform meant relief for the “forgotten Americans” he talked about on the campaign trail. But Republicans had other plans, intending to take a wrecking ball to the system of American government that has been in place since 1933 and replace it with one based in their own ideology. If the “Tax Cuts and Jobs Act” becomes law, they will have succeeded.

It is hard to overstate the significance of this bill. It is a poison pill, killing the New Deal. The series of laws put in place by Franklin Delano Roosevelt and a Democratic Congress in the 1930s regulated business so employers could no longer abuse their workers or destroy the environment. It provided basic social welfare to support the elderly and infirm, and it developed infrastructure to guarantee everyone equal access to economic opportunity. Crucially, Democrats based their system on a distinctive ideology: The government must keep the economic playing field level for all Americans. As people at the bottom prospered, they would fuel economic growth for everyone.

This was indeed a “new deal for the American people,” as FDR put it. When he named it in 1932, government policy was based on the opposite ideology. Republicans who controlled the government in the 1920s insisted that national prosperity depended on government protection of the rich, who they believed would plow their capital back into the economy to provide jobs and higher wages for workers. When they took control of all branches of the federal government in 1921, they used their unchecked power to remake the government along the lines of their ideology. They slashed taxes and regulations and turned government over to businessmen, arguing that their policies would speed up the economy and bring the nation untold wealth.