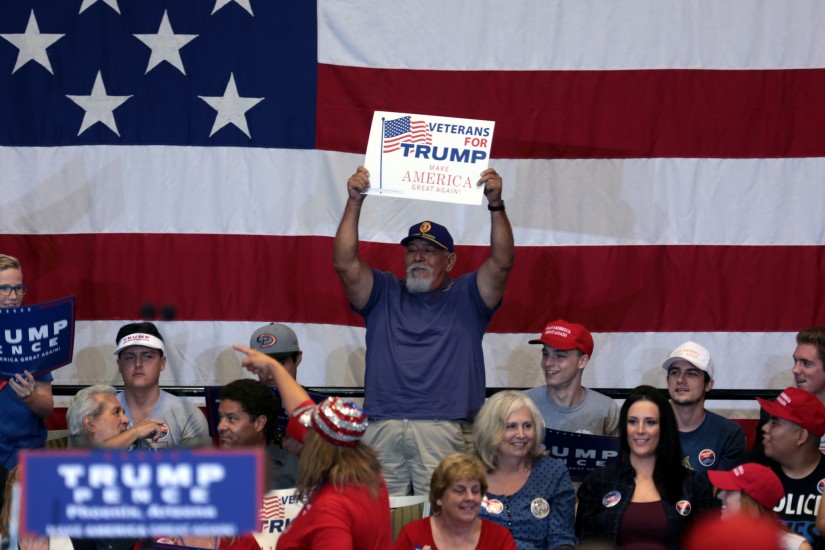 Supporters of Donald Trump at a campaign rally in Phoenix, Arizona, August 2, 2016.
flickr.com/gageskidmore

In his Pensacola, Florida, speech endorsing Roy Moore last Friday, Donald Trump addressed the “forgotten men and women of this country.” This was not the first time that Trump has spoken of the forgotten many. He made mention of them in his election victory speech and then again at his inauguration. “You will never be ignored again,” he announced. At a rally in West Virginia, he went one step further, saying, “Your dreams are my dreams, your hopes are my hopes, and your future is what I’m fighting for each and every day.” Time and time again, Trump has asserted an unlikely identification with the “ignored,” claiming that he not only understands their feelings but also shares them. But who are the forgotten, and why does Trump keep returning to them?

History helps answer this question. As a formulation, the idea of the nation’s “forgotten men and women” was first made famous by Franklin D. Roosevelt in a presidential campaign radio address in 1932. But Roosevelt’s forgotten men and women were fundamentally different from those invoked by Trump and served an entirely different purpose. By tracing how the phrase has changed meaning between then and now, we can understand how Roosevelt’s vision was subverted by the inverted populism that the current president has mastered, but which has been in circulation since the New Deal.

In his April 1932 speech, Roosevelt referred to “the forgotten man at the bottom of the economic pyramid,” proclaiming the need to rebuild the economy by working “from the bottom up and not from the top down.” In saying this, he was explicitly repudiating Yale professor William Graham Sumner, who originally coined the phrase in an 1876 essay, “The Forgotten Man,” often taken to be a prime specimen of social Darwinism. Sumner described the forgotten man as a productive citizen, overburdened by society’s demand that he support the unproductive: “He works, he votes, generally he prays—but he always pays—yes, above all, he pays,” Sumner wrote. Roosevelt’s critics took notice, arguing that he had distorted Sumner’s intention. If Sumner’s forgotten man was the taxpayer, they claimed, Roosevelt’s forgotten man was the one who lived off the taxes of others.

Soon after Roosevelt defined the forgotten man as a person whose economic position justified the New Deal, the meaning of the term changed again. This time it came to symbolize the person victimized on very different economic grounds. In 1934 Congressman James M. Beck called the taxpayer “the new forgotten man.” In 1940 another Republican representative, Bruce Barton, labeled the “middle-class citizen” the “latest reincarnation of the forgotten man.” By 1951 Northwestern political scientist William M. McGovern brought these two groups together when he spoke of the “forgotten man of the middle class” who was “rapidly being taxed out of existence.” Rather than the “fellow out of work,” argued Merryle Rukeyser in 1951, the label more properly belonged to “the taxpayer who pays the freight for the adventures of politicians.”