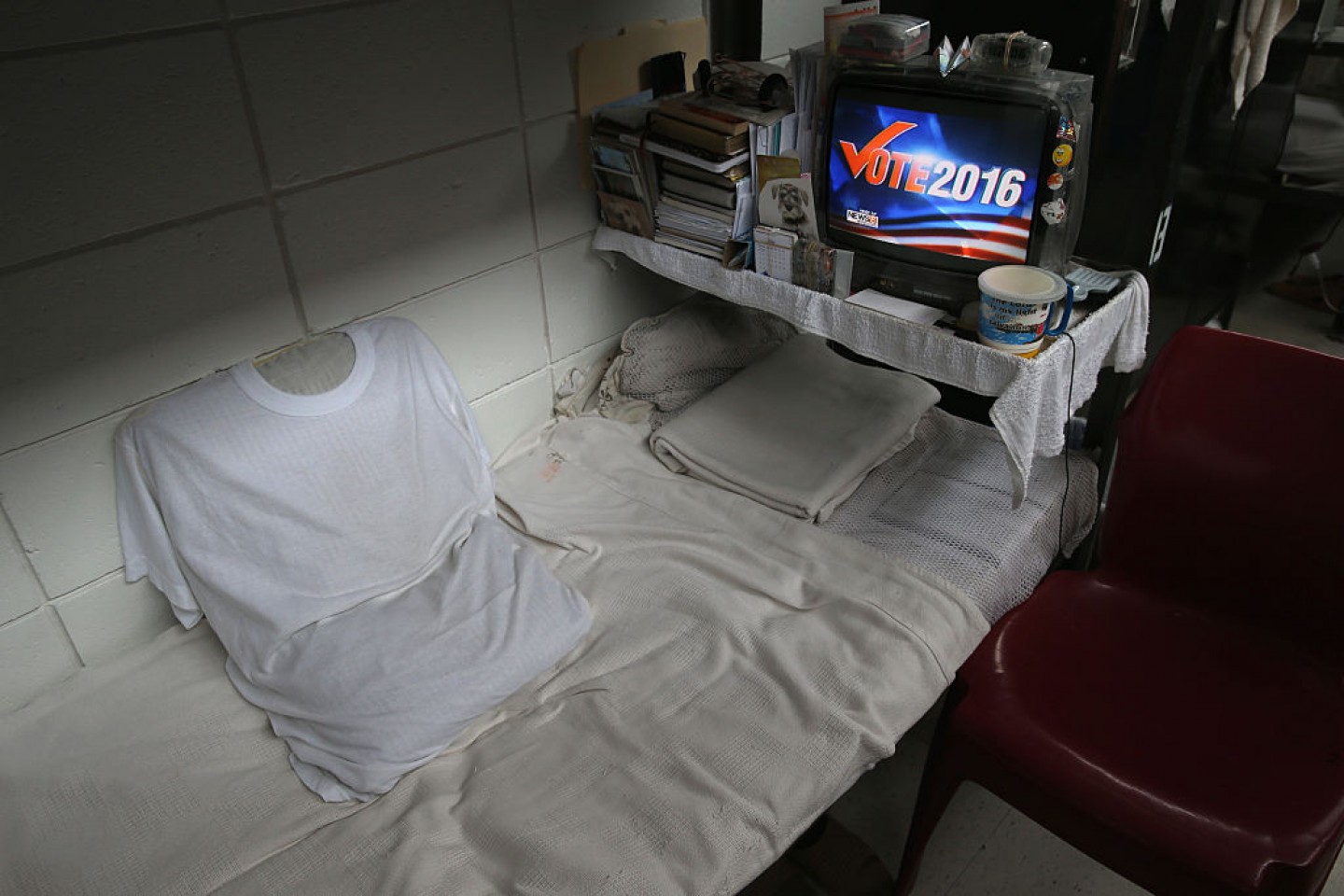 A cell in the Cybulski Rehabilitation Center in Enfield, Connecticut, on May 3, 2016.
John Moore/Getty Images

Earlier this month, Alabama voters elected Doug Jones to the U.S. Senate seat vacated by Attorney General Jeff Sessions—making Jones the first Democrat to win statewide election in Alabama since 2006, and the state’s first Democratic senator in a generation. In parsing the implications of Jones’s victory, commentators have focused on the electoral power of African-American voters and the prospects for reviving the Democratic Party in the Republican-dominated South.

But the December 12 special election also marked a subtler turning point: it represented the first opportunity that many Alabamians with felony convictions have had to participate in a statewide election. Earlier this year, Alabama lawmakers enacted legislation relaxing voting restrictions, and as the election approached, pastor Kenneth Glasgow led a statewide effort to explain the new rules. He estimates that his campaign helped thousands of newly eligible voters to register.

The Alabama changes are the result of a nationwide push by civil rights advocates to roll back restrictions on voting rights for those with criminal histories. According to the Sentencing Project, about six million Americans are currently barred from voting due to felony convictions. But that number doesn’t capture the full impact of the restrictions, since voting eligibility varies from state to state. Florida, for instance, accounts for more than a quarter of the national total. And given the racial disparities that permeate the criminal justice system, felon disenfranchisement laws also have a disproportionate impact on African-Americans. In four Southern states—Florida, Kentucky, Tennessee, and Virginia—one in five African-Americans is unable to vote as a result of these laws.

Despite the overall trend in recent years towards voter ID laws and other voting restrictions, voting rights advocates have made some progress on the particular issue of felon disenfranchisement. In the run-up to the 2016 presidential election, Virginia Governor Terry McAuliffe took steps to restore voting rights for tens of thousands of people. In Florida, a grassroots campaign is underway for a ballot initiative that could loosen the state’s extremely harsh felon voting restrictions, potentially restoring voting rights to about 1.6 million people. Given Florida’s “swing-state” status, it’s a change that could make a meaningful difference in the 2020 presidential election.

It makes sense that activism around felon disenfranchisement has gained momentum in recent years. The issue sits at the intersection of two major trends in contemporary politics: growing public concern about mass incarceration, and contentious partisan battles over voting and gerrymandering. But understanding the origins of felon disenfranchisement – and in particular, why states are allowed to strip people of their voting rights at all – requires traveling back farther in time.

Today’s uneven landscape of felon disenfranchisement reflects multiple historical legacies, and one relatively obscure provision of the U.S. Constitution. First – the history. Since the early 19th century, Southern states have applied the harshest voting-related consequences to criminal convictions. It’s a pattern that historian Pippa Holloway traces in part to the legacy of slavery, and in part to Southern states’ history of emphasizing punishment over rehabilitation for criminal offenders. After the Civil War, as the Brennan Center for Justice explained in a recent report,

two interconnected trends combined to make disenfranchisement a major obstacle for newly enfranchised black voters. First, lawmakers—especially in the South—implemented a slew of criminal laws designed to target black citizens. And nearly simultaneously, many states enacted broad disenfranchisement laws that revoked voting rights from anyone convicted of any felony.

So how is it that felon disenfranchisement laws survived the civil rights revolution of the 1950s and ’60s, even as the Supreme Court invalidated other state-level voting restrictions? The answer brings us to that obscure constitutional provision. It appears in the Fourteenth Amendment, ratified in 1868, and best known today for its first section, guaranteeing birthright citizenship, equal protection, and due process. But the amendment has a number of other components, including Section 2, which provides that “when the right to vote … is denied to any of the male inhabitants of [a] state … or in any way abridged, except for participation in rebellion, or other crime,” that state’s representation in Congress “shall be reduced” accordingly.

The origins of this provision lie in post-Civil War debates about the meaning of citizenship in a post-slavery polity. Nineteenth-century political rhetoric typically distinguished between “civil rights,” such as testifying in court or signing a contract, and “political rights,” such as voting. After emancipation, Republicans generally agreed that the abolition of slavery implied that African-Americans must also be afforded equal civil rights. But they initially remained more divided about what they called political rights—and Democrats generally opposed expanding the franchise to African-Americans altogether.

Radical Republicans hailed the right to vote as “the freedman’s Moses,” the step that would make emancipation meaningful. But others argued that African-Americans could be excluded from the political community even if they could no longer be enslaved. After all, although states had generally moved towards universal suffrage in the 19th century (for white men, anyway), there was a long history of state laws denying the vote to certain groups of people on the basis of property or other requirements—and, of course, on the basis of sex.

Section 2 constituted the Reconstruction Congress’s first attempt at a compromise between the two factions. It gave states a choice: they could continue disenfranchising African-American men, but if they did, their representation in Congress would be reduced accordingly. Barring the votes of those who had “participat[ed] in rebellion, or other crime,” on the other hand, would not have the same effect. States could disenfranchise them – and women – without suffering any reduction in their congressional apportionment.

Two years later, the Fifteenth Amendment was ratified, prohibiting states from denying the vote on the basis of race, and as a result, the apportionment cudgel of Section 2 was never really enforced. And yet the provision has continued to remain potent in one specific sense: the Supreme Court has pointed to the “other crime” caveat to explain why felon disenfranchisement laws are constitutional. In the 1974 case of Richardson v. Ramirez, the Court heard a challenge to California laws, which, at the time, permanently barred people with certain felony convictions from voting. (Today, California permits those with felony convictions to vote once they have completed their sentence.) Writing for the Court, Chief Justice William Rehnquist interpreted Section 2’s “other crime” language to provide “an affirmative sanction” for “the exclusion of felons from the vote.”

Some legal scholars have criticized Richardson, arguing either that we should understand the Fifteenth Amendment as having effectively repealed Section 2 of the Fourteenth Amendment, or that Section 2’s “other crime” language was never intended by the amendment’s framers to carry such broad meaning. Other legal scholars have suggested that Richardson got it right. But it’s worth emphasizing that either way, Richardson is narrow in its implications. Even on Justice Rehnquist’s interpretation, Section 2 only permits states to disenfranchise those convicted of crimes; it certainly doesn’t require states to do so. Indeed, there are two states—Maine and Vermont—with no felon disenfranchisement laws at all. In those states, people convicted of felonies never lose the right to vote and may even vote from within prison—an example that activists around the country hope more states will follow. Harsh disenfranchisement laws such as Florida’s have deep historical roots. But one day soon they might be, simply, history.