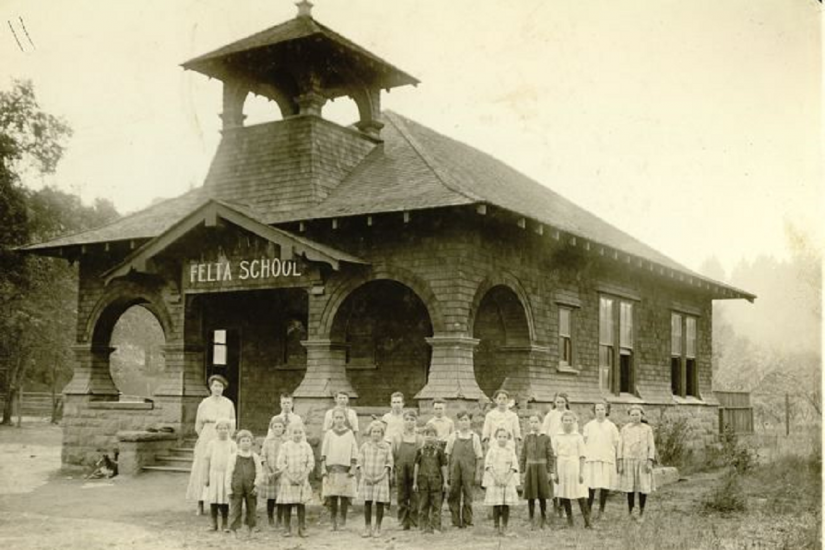 An early photo of the teacher and students of the Felta Schoolhouse in Sonoma County, California, circa 1910.
West Side School District/Wikimedia Commons
…

Public schools did not emerge between the Revolution and the Civil War because education reformers convinced all Americans to embrace the idea of the public good. Instead, they emerged because of public things — because Americans had to get involved in local contexts building and financing actual school buildings. It was by building schools collectively that the idea of education as a shared responsibility emerged. True, Revolutionary-era state constitutions proclaimed the importance of an educated citizenry to the new republic. And these proclamations — these ideals — did spur some reformers and legislators to get the ball rolling. Yet elite reformers — from Thomas Jefferson in Virginia to Benjamin Rush in Pennsylvania — struggled to convince voters that they should pay for the education of other people’s children, that education was a public good that should be shouldered collectively.

While Jefferson, from his hilltop Monticello, or even in the trenches of the state government, might proclaim that public education was necessary to render “the people the safe, as they are the ultimate, guardians of their own liberty,” most Virginians did not desire to pay for schools for every child “without regard to wealth, birth or other accidental condition,” as Jefferson proposed. Yes, education was a public good, some Americans agreed. The problem was that not enough did. As Pennsylvania superintendent of education Francis Shunk noted in 1838: “It may not be easy to convince a man who has educated his own children in the way his father educated him, or who has abundant means to educate them, or who has no children to educate, that in opposition to the custom of the country and his fixed opinions founded on that custom, he has a deep and abiding concern in the education of all the children around him, and should cheerfully submit to taxation for the purpose of accomplishing this great object.”

Why then did so many Americans come to support the public schools? It was not easy but, I argue in my new book Democracy’s Schools: The Rise of Public Education in America, the case was made not through abstract reasoning or public deliberation alone (although these mattered very much), but because legislators organized school districts and authorized and later mandated local citizens to come together to run their schools, to build schoolhouses, to hire teachers, and to collect taxes to accomplish these ends. In short, if early efforts were inspired by ideas about the public good, broad support for education as a public good emerged because Americans were forced to interact with each other to create and to sustain what Honig calls public things: the shared schoolhouse.