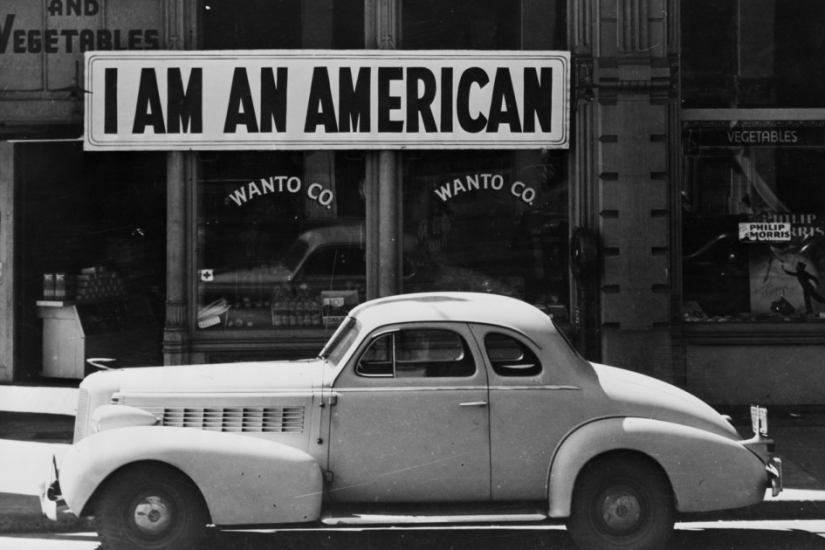 A sign reading “I Am an American” outside a shop that was closed following an order for the evacuation of people of Japanese descent, in 1942.
Dorothea Lange/Library of Congress
…

President Trump’s aggressive stance on immigration, predicated on the language of “aliens” and real Americans, has given internment, and the broader history of Asians in the United States, a new relevance. Taken as a whole, this history vividly chronicles the shifting horizons of citizenship. The Chinese Exclusion Act of 1882 was the first immigration policy to target people from a specific nation. But it was simply the culmination of a series of measures that sought to slow the tide of Chinese migrant laborers, by targeting where they lived and the amount of air they breathed, the families they sought to bring over. It was only repealed, in 1943, out of wartime necessity, as a way of distinguishing good immigrants—the Chinese, America’s wartime ally—from bad.

The history of immigration policy is filled with moments like these, when a group goes from subhuman to superhuman within a few short years, because of political winds beyond their grasp. My grandfather and Korematsu were born a year apart, under different circumstances, and embodying two distinct possibilities of American life. It’s a reminder that the “Creed of Democracy” contains limits—that no amount of assimilation or integration will protect you when an alien requires conjuring; that being a model citizen means little when laws can be enforced arbitrarily, and you no longer qualify as one. Yet many of us still try to live up to such impossible standards.

There is a beauty to the public expressions of difference we’ve seen in the past couple of weeks: the Yemeni bodega owners who prayed outside Borough Hall during a protest against the Trump Administration’s anti-Muslim travel ban, the protest signs proclaiming that it is immigrants who have made America great. It called to mind the Japanese internees who left signs in front of the homes they vacated: “I Am an American.” When I think about my grandfather’s notes, what strikes me now isn’t the dutiful neatness of his transcriptions. It’s that thousands of prospective Americans were doing roughly the same thing at the same time. Some gave back, becoming part of the immigrant success story that flatters our system. Others didn’t. And others wondered why citizenship is a story often told through the language of debt and giving back—why it is always incumbent on the immigrant to prove himself or herself a good, productive, hyper-patriotic American.