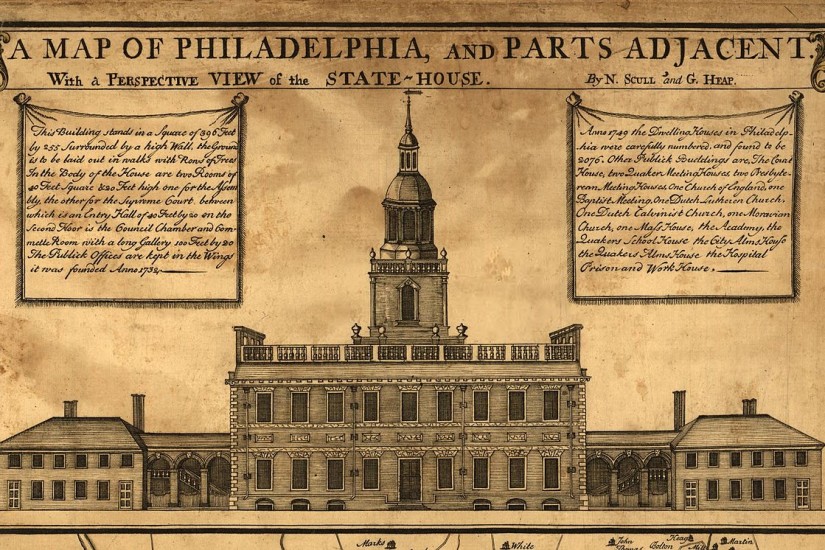 Drawing of the Pennsylvania State House (Independence Hall), from a 1752 map of Philadelphia.
N. Scull and G. Heap/Library of Congress

Goodbye Independence Hall, hello Amazon headquarters! That was the “news” recently spoofed by the popular parody website, The Onion. The article lampooned Philadelphia’s eagerness to house Amazon’s second command center and included an image of the city leveled to make way for new business. “It was definitely bittersweet saying goodbye to the Liberty Bell,” says the satirical version of Mayor Jim Kenney, “but it’s important we encourage businesses to invest in the city.”

The article’s humor arises, in part, from treating one of the nation’s most cherished historic monuments as prime real estate. Yet 200 years ago, Philadelphians faced this very situation when the commonwealth of Pennsylvania planned to subdivide the site for private development. The resulting campaign to preserve Independence Hall featured the same critiques of urban development, capitalist greed, and corrupt public interest that appeared in The Onion two centuries later. Since then, observers have viewed Independence Hall as a bellwether of the values guiding urban development. Their commentary reminds us that citizens long have shaped historic sites not simply to commemorate the past but also to define what should not be for sale during times of economic transition.

Independence Hall’s preservation began in 1812 when Pennsylvania legislators planned to sell the building—then known as the old statehouse—and carve the surrounding green space into building lots. Colonial legislators had met in the building for four decades before American patriots made the spot notorious by signing the Declaration of Independence and debating the U. S. Constitution under its roof. After the state government removed its seat to Harrisburg in 1799, however, legislators saw the building and its surrounding land as potential revenue. Architectural salvage from the demolished building and multiple lots sold “to the highest and best bidders” would raise money to build a grand statehouse in the new capital.

Philadelphia’s municipal leaders valued the site in a different way. The age of the building and the grounds surrounding it, they argued, did not make the site ripe for development. The civic value of the place outweighed any financial profit that development would bring. In other words, permanence of this prime real estate would serve the public good.