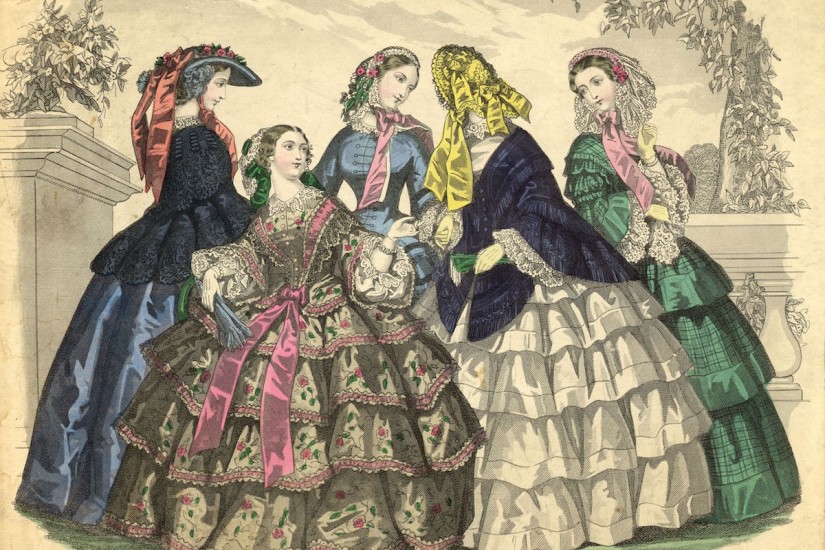 Flounced crinolines, shawls and lace for the summer of 1857. (July 1857)
Hulton Archive/Getty Images
…

As women attempted to enter the public sphere, they were shackled both physically, by their starched, horsehair-padded skirts, and socially, by the perils of nonconformity. It was suffragists, women seeking greater motility in every respect, who pioneered the dress reform movement. Most notable among them was Amelia Bloomer — yes, that Amelia Bloomer, she who championed bloomers as an alternative to more cumbersome undergarments. She didn’t invent the eponymous garment, but she was certainly its most famous exponent. Her attitude was catching: All over the country, women had had damn near enough.

It was in this context that the pannier finally re-emerged, in 1846. The new iteration, called the hoop skirt or the cage crinoline, was its predecessor’s more sophisticated cousin. This one was made of steel and easily producible on a large scale. The skirts were cheap and relatively light, and they eliminated the heavy versions against which Bloomer and company had railed. With layers of petticoats replaced by a single infrastructure, women’s legs were unbound for the first time in half a century.

Most radically of all, they were cheap. Mere months after R.C. Milliet filed its patent in Paris, the cage crinoline was being produced by the tens of thousands in Europe and the United States. The panniers of Louis’s day were handmade by skilled artisans, driving their prices to noble proportions. The hoop skirt was an ironic inversion of its courtly forebears: worn by the idle rich and working poor alike. Suddenly everyone and her mother could afford the trappings of affluence. Predictably, the backlash began.