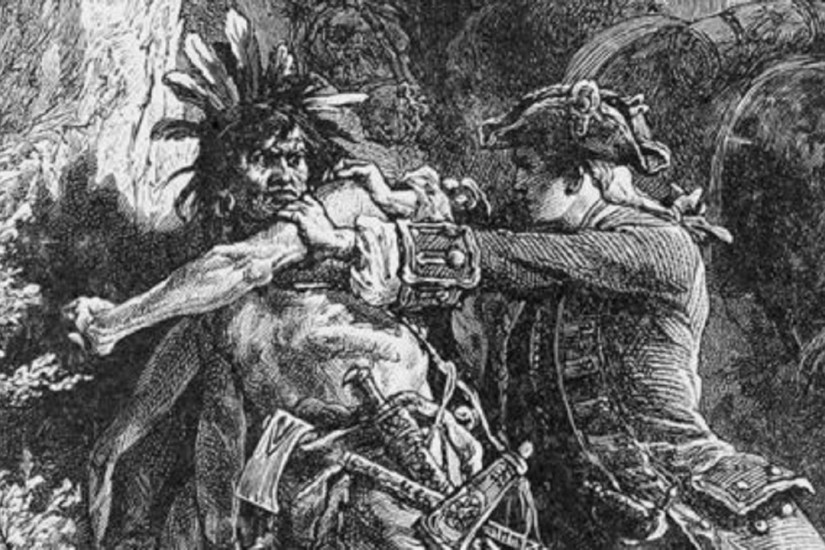 Nothing like Madam Sacho: A 1904 image of a frontier militiaman fighting with a Mohawk warrior captures what people today and even during the Revolution expected to find when General Sullivan took the war to the Haudenosaunee. (Caption by National Endowment for the Humanities.)
Library of Congress

Soldiers called her many things: “a very old Squaw,” “helpless impotent wretch,” “antediluvian hag.” Only one recorded anything like a name: “Madam Sacho.” Yet we would not even know that much about her if, in September 1779, Major General John Sullivan and his men had not stumbled across her in the desolate country of the Haudenosaunee (who have also been called many things, including Iroquois or the Six Nations).

The land, though very recently bustling with Indians, was eerily abandoned. Kettles had been left in a hurry by the hearth, books had been thrown aside, and tall corn stalks stood untouched, ready for harvest, in the field. Those who had evacuated perhaps imagined they would be returning to their homes soon. It was not to be. Sullivan and his men burned houses, fields, and whole towns down to the ground.

Madam Sacho must have emerged from the smoke like a ghost: startling, uncanny, and with a tale to tell. It was about war, conflict, and flight. There were many such narratives from the American Revolution. For the soldiers at the time and for modern audiences, though, Madam Sacho is a surprise. Soldiers expected whooping warriors with tomahawks raised. Some modern readers probably imagine the same, or else they envision tidy lines of redcoats firing against minutemen. But Sullivan’s Campaign was no Lexington and Concord, nor was it Yorktown. It was another kind of battle, with fewer casualties and yet profoundly destructive all the same.

It may seem an obscure, if arresting, episode: one little old lady against an entire set of regiments. Nevertheless, it reveals the small, usually overlooked, heroics of an ordinary woman caught in devastation, as well as something about one of the most important political players in early America, the Haudenosaunee. It also tells us something about the circumstances in which U.S. policy toward Native Americans was forged. Finally, itilluminates the agonizing decisions of that most famous American Revolutionary soldier of all: General George Washington.