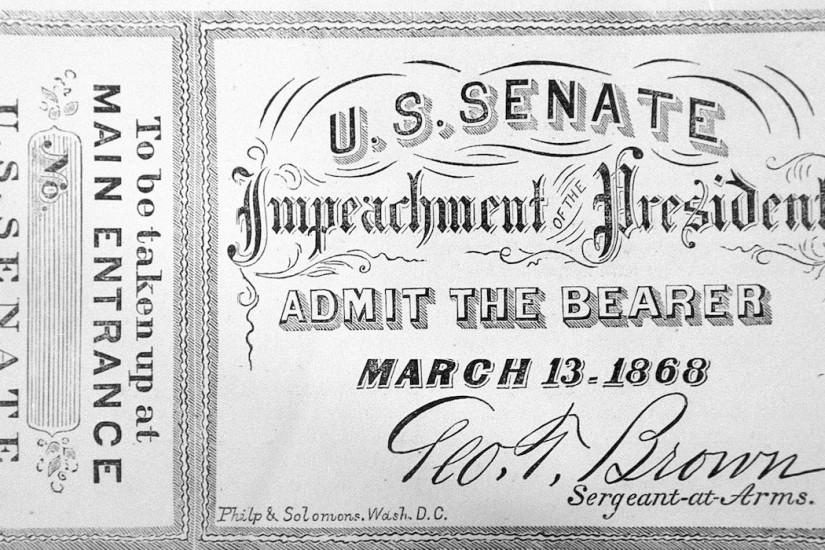 A facsimile of the ticket of admission to the impeachment of President Andrew Johnson March 13, 1868.
Library of Congress
…

Obviously, this was about much more than an entertaining trial. The confrontation between Johnson and the men who wanted to remove him from office, the so-called Radical Republicans, was a fight over the future direction of the United States; a fight with implications that reverberate to this day. Johnson’s real crime in the eyes of opponents was that he had used the power of the presidency to prevent Congress from giving aid to the four million African-Americans freed after the Civil War. Johnson’s deep antipathy toward black people, not his view of the Constitution, guided his actions.

What did it mean for the country’s future that the man at the head of the government—at a moment when black people’s fortunes were being decided—hated blacks? Johnson had opposed slavery because he thought it hurt the class of poor whites from which he had come. Blacks were to be freed but left to the mercy of white Southerners. His plan of action—to put whites back in charge in the South—set him on a collision course with the Radical Republicans, who believed that the South must be transformed to incorporate blacks into American society as equals.

Johnson opposed congressional measures adopted to try to help African-Americans become productive members of society with the dignity accorded to whites. He opposed black suffrage, land reform and efforts to protect blacks against the violence that Southern whites unleashed upon them after the war’s end. Because he had no vice president, if Johnson had been removed from office—he was impeached, but not convicted and removed from office—Benjamin Wade, the president pro tempore, would have taken his place. A President Wade—Radical Republican and champion of black rights—might have altered the course of American history, perhaps for the better.