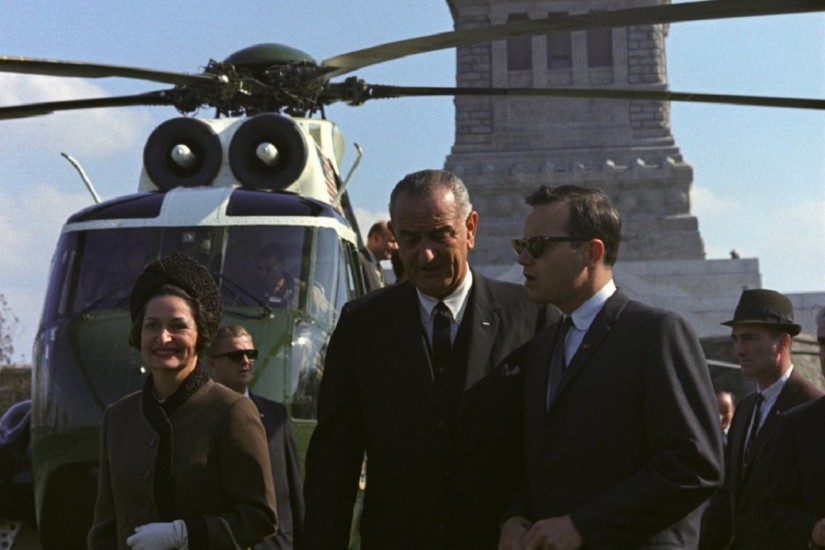 President Lyndon B. Johnson prepares to sign the Immigration and Nationality Act of 1965 at the foot of the Statue of Liberty on October 3, 1965.
Yoichi Okamoto/LBJ Library
…

The 1965 Act: A Success or Failure?
Opinions differ on whether the 1965 Act helped or harmed the country. The law’s proponents see it as a historic success and assert that the estimated 59 million immigrants who have come to the United States since its passage have made the country younger, infused it with diversity and talent, and generated prosperity and economic growth. Critics contend that high admission levels of diverse groups of immigrants have created more competition for low-skilled U.S. workers, and shattered the country’s cultural homogeneity.

Despite such misgivings, a recent major study by the National Academies of Sciences, Engineering, and Medicine suggests that post-1965 Act immigrants and their children—estimated to comprise one in four people in the United States—are successfully integrating into U.S. society. The study finds that immigrant integration increases over time and successive generations achieve strong progress in key indicators including education, earnings, language proficiency, and occupational distribution. At the same time, immigrants and their descendants as a whole still lag behind the native-born population on these indicators.

How well post-1965 Act immigrants have integrated has varied substantially, depending on their legal status, social class, educational background, and the geographic area where they settle, the study also found. Profiles of diaspora groups (comprised of immigrants and their U.S.-born descendants) from countries that have dominated post-1965 immigration flows show that many have surpassed median U.S. educational attainment levels, household incomes, and workforce participation rates. The Indian diaspora, for example—numbering 3.8 million—is significantly higher educated, more likely to be employed, and has a higher household income compared to the U.S. population as a whole. The Filipino, Bangladeshi, Pakistani, Egyptian, Kenyan, and Nigerian diasporas tell similar stories, while the diasporas of other countries, such as Ghana, Morocco, Ethiopia, and Colombia are generally on par with medians for the U.S. born on most indicators. Further, the educational levels of newly arrived immigrants have been consistently improving since the 1970s, according to the Pew Hispanic Trends study. In 2013, 41 percent of recently arrived immigrants were college graduates compared to 20 percent in 1970. In comparison, 30 percent of the native-born population had college degrees in 2013 vs. 11 percent in 1970.