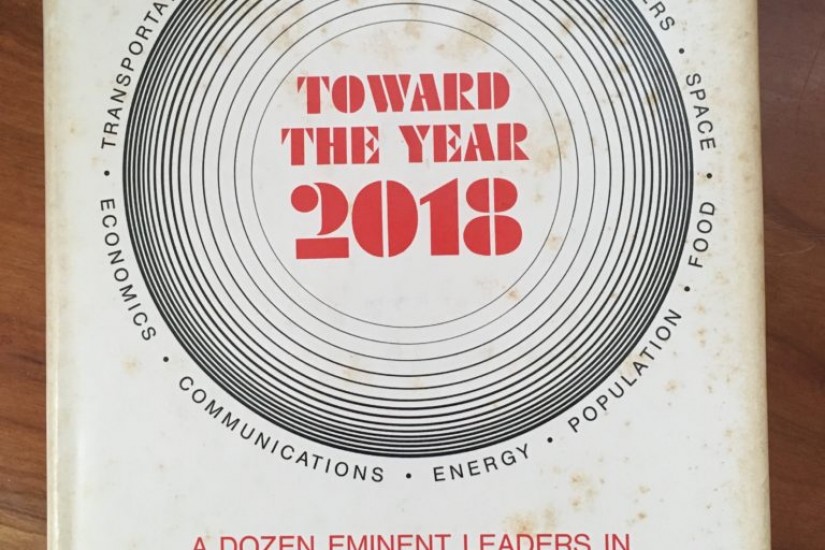 Much of “Toward the Year 2018” might as well be science fiction today. With fourteen contributors, ranging from the weapons theorist Herman Kahn to the I.B.M. automation director Charles DeCarlo, penning essays on everything from “Space” to “Behavioral Technologies,” it’s not hard to find wild misses. The Stanford wonk Charles Scarlott predicts, exactly incorrectly, that nuclear breeder reactors will move to the fore of U.S. energy production while natural gas fades. (He concedes that natural gas might make a comeback—through atom-bomb-powered fracking.) The M.I.T. professor Ithiel de Sola Pool foresees an era of outright control of economies by nations—“They will select their levels of employment, of industrialization, of increase in GNP”—and then, for good measure, predicts “a massive loosening of inhibitions on all human impulses save that toward violence.” From the influential meteorologist Thomas F. Malone, we get the intriguing forecast of “the suppression of lightning”—most likely, he figures, “by the late 1980s.”

But for every amusingly wrong prediction, there’s one unnervingly close to the mark. It’s the same Thomas Malone who, amid predictions of weaponized hurricanes, wonders aloud whether “large-scale climate modification will be effected inadvertently” from rising levels of carbon dioxide. Such global warming, he predicts, might require the creation of an international climate body with “policing powers”—an undertaking, he adds, heartbreakingly, that should be “as nonpolitical as possible.” Gordon F. MacDonald, a fellow early advocate on climate change, writes a chapter on space that largely shrugs at manned interplanetary travel—a near-heresy in 1968—by cannily observing that while the Apollo missions would soon exhaust their political usefulness, weather and communications satellites would not. “A global communication system .?.?. would permit the use of giant computer complexes,” he adds, noting the revolutionary potential of a data bank that “could be queried at any time.”

What “Toward the Year 2018” gets most consistently right is the integration of computing into daily life. Massive information networks of fibre optics and satellite communication, accessed through portable devices in a “universality of telephony”—and an upheaval in privacy? It’s all in there.