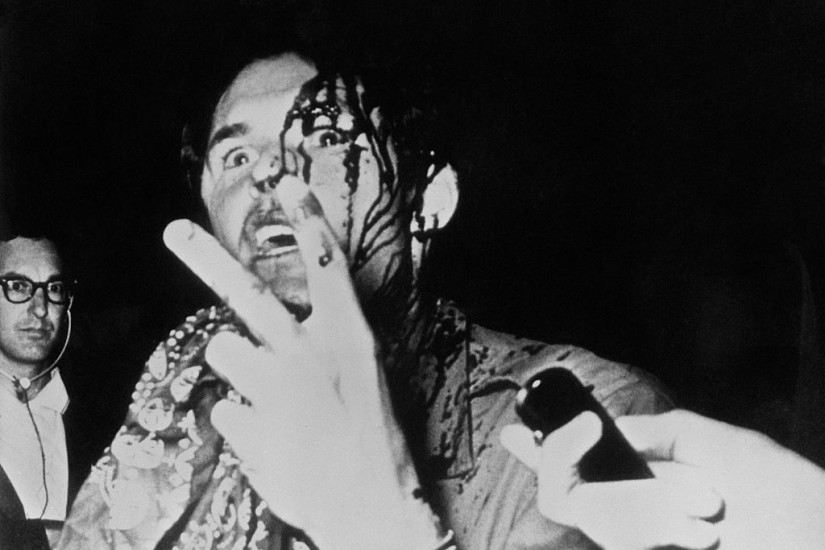 A photographer bleeding from a head wound given to him by police during the protests in Grant Park outside the 1968 Democratic National Convention. August 28, 1968.
Agence France Presse/Getty Images

When Alan Shane Dillingham, a historian at Spring Hill College in Alabama, lectures on the 1960s he starts by displaying a timeline of the decade’s most iconic, tumultuous year — 1968.

The assassinations of the Rev. Martin Luther King Jr. and Robert F. Kennedy. The riots that shook Washington, Chicago, Baltimore and other U.S. cities. Campus protests. Civil rights protests. Vietnam War protests. The Tet Offensive. The My Lai massacre. The rise of Richard Nixon and the retreat of Lyndon Johnson. And so much else: Black Power, “The White Album,” Andy Warhol, “Hair,” Apollo 8, the first black character in Peanuts.

“Was there something in the water?” Dillingham asks his students. “What is it about this year?”

With 2018 marking the 50th anniversary of that extraordinary year, Dillingham and more than 1,500 other historians descend on Washington this week for the American Historical Association’s annual meeting, where they will grapple with that question and others about 1968 in a series of special panels.

The historians arrive in the nation’s capital at a time when many of 1968’s flash points still consume the country, including race, political polarization, war and America’s standing in the world. The man who occupies the White House graduated from the University of Pennsylvania in 1968 and got a draft deferment for bone spurs in his heels, exempting him from military service in Vietnam.

The election of President Trump, who came of age in the ‘60s, and even the designation of gender neutral bathrooms at the conference are reminders that the political and social forces unleashed at that time still reverberate today. But the historians aren’t looking at 1968 in the context of current events. Instead, they are focusing on how that year shaped — and was shaped — by global events.