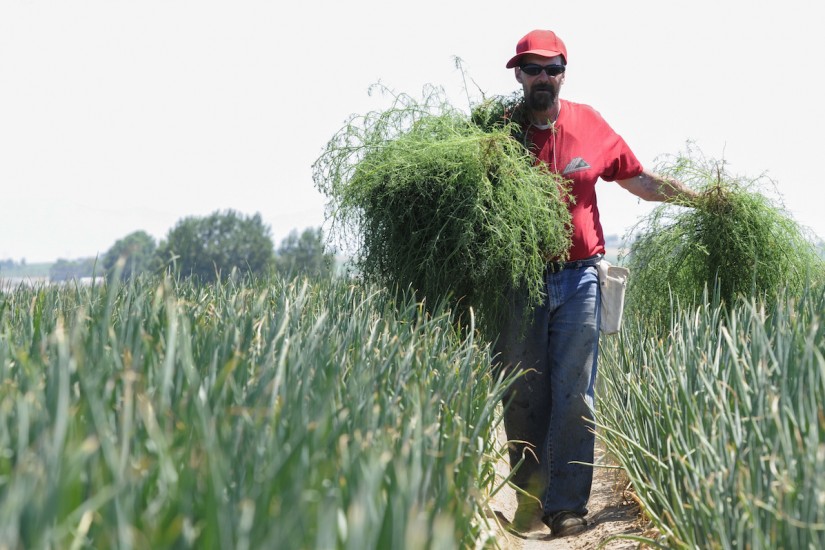 Kenneth Price, part of a work crew at the Idaho Department of Corrections, in a field in Caldwell, Idaho, 2017.
Chris Bronson /The Idaho Press-Tribune/AP

The breaded chicken patty your child bites into at school may have been made by a worker earning twenty cents an hour, not in a faraway country, but by a member of an invisible American workforce: prisoners. At the Union Correctional Facility, a maximum security prison in Florida, inmates from a nearby lower-security prison manufacture tons of processed beef, chicken and pork for Prison Rehabilitative Industries and Diversified Enterprises (PRIDE), a privately held non-profit corporation that operates the state’s forty-one work programs. In addition to processed food, PRIDE’s website reveals an array of products for sale through contracts with private companies, from eyeglasses to office furniture, to be shipped from a distribution center in Florida to businesses across the US. PRIDE boasts that its work programs are “designed to provide vocational training, to improve prison security, to reduce the cost of state government, and to promote the rehabilitation of the state inmates.”

Although a wide variety of goods have long been produced by state and federal prisoners for the US government—license plates are the classic example, with more recent contracts including everything from guided missile parts to the solar panels powering government buildings—prison labor for the private sector was legally barred for years, to avoid unfair competition with private companies. But this has changed thanks to the American Legislative Exchange Council (ALEC), its Prison Industries Act, and a little-known federal program known as PIE (the Prison Industries Enhancement Certification Program). While much has been written about prison labor in the past several years, these forces, which have driven its expansion, remain largely unknown.

Somewhat more familiar is ALEC’s instrumental role in the explosion of the US prison population in the past few decades. ALEC helped pioneer some of the toughest sentencing laws on the books today, like mandatory minimums for non-violent drug offenders, “three strikes” laws, and “truth in sentencing” laws. In 1995 alone, ALEC’s Truth in Sentencing Act was signed into law in twenty-five states. (Then State Rep. Scott Walker was an ALEC member when he sponsored Wisconsin’s truth-in-sentencing laws and, according to PR Watch, used its statistics to make the case for the law.)