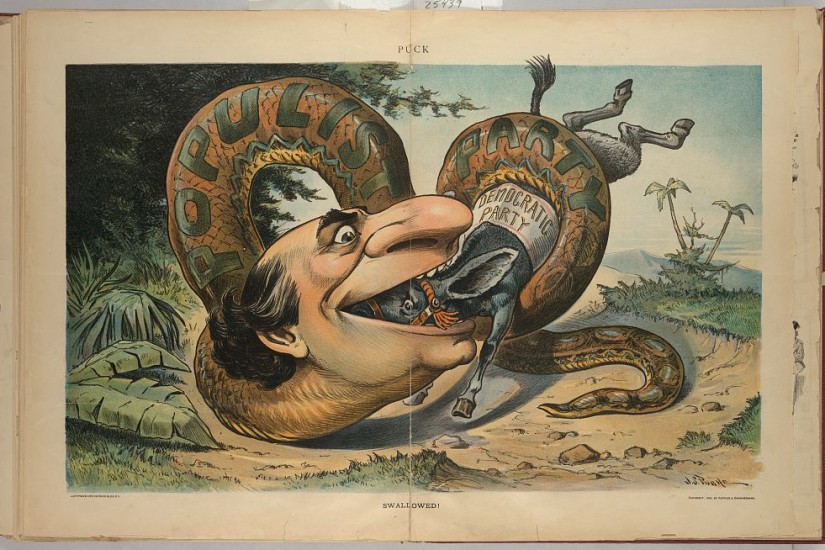 Illustration shows William Jennings Bryan as a large snake labeled &#34;Populist Party&#34; entwined around a donkey labeled &#34;Democratic Party&#34; and about to swallow it.
J. S. Pughe/Library of Congress
…

Liberal commentators have been strident in their descriptions of the trend. To Princeton political scientist Jan-Werner Müller, the rise of populism is not just a danger or a threat; to his mind, it represents a “degraded form of democracy” that Western societies need to rid themselves of as swiftly as possible. Former Belgian prime minister Guy Verhofstadt, a leading figure in EU politics, is less oblique. In his view, populism heralds nothing less than the start of “a new world war.” It’s a long away from Obama’s lament.

Recently, this transatlantic discursive rift seems to have narrowed somewhat, as some Americans have drawn closer to the European view. “Populism is a toxic brew,” notes Harvard historian Niall Ferguson in a recent essay, “as well as an intoxicating one. Populists nearly always make life miserable for whichever minorities they chose to scapegoat, but they seldom make life much better for the people whose ire they whip up.”
American and European elites are now converging on an intrinsically pejorative understanding of the term, with think pieces and op-eds on the dangers of the p-word now forming an obligatory portion of every news cycle.

Still, this negative consensus seems rather less absolute on the American side. American leftists seem to have few qualms about labeling Bernie Sanders “a progressive populist.” On the other hand, Jeet Heer, a writer for the New Republic, calls that ascription a “fundamental lapse of judgment.” In a 2016 election debate, Cornel West deemed it a fatal mistake to label someone like Trump a “populist.” Unlike their European counterparts, the American commentariat remains hesitant to attach an exclusively pejorative conception of the term. If Barack Obama — a stern opponent of Brexit and supporter of the stillborn transatlantic free-trade treaty — feels that Europeans have a misplaced definition of populism, something must be amiss.

The fact is, historians and journalists have been quibbling over the exact meaning of the term populism — and who should and shouldn’t qualify as one — for at least sixty years. A lack of historical analysis has allowed the term populism to retain a plasticity rivaled by few other concepts. According to recent reports, the word was used no less than a million times in journalistic publications in the years 2014–16. Essayists declare that we’re living a “populist nightmare,” while academic journals compete in what can only be called a mini-industry.