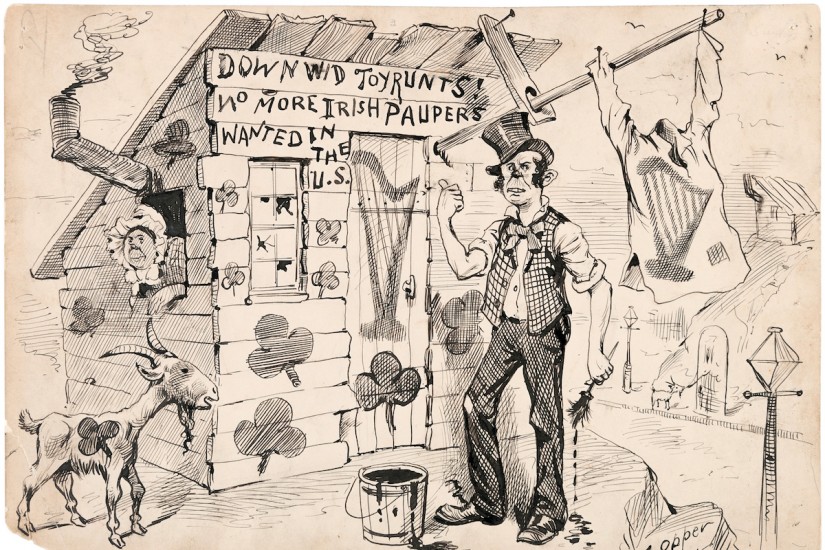 Just as opponents of immigration today consider undocumented immigrants and refugees burdens on American society, nativists in the 19th century resented the inability of many Irish immigrants to support themselves financially and their dependence on public relief. Resentment toward what some considered the undeserving poor — “St. Patrick’s Vermin” — spawned unsympathetic and hostile attitudes toward needy foreigners, giving rise to a series of laws that restricted their immigration.

These laws became the foundations for American deportation policy. In fact, our entire system of immigration control is rooted in nativism against the indigent Irish that goes back to the antebellum period.

During the first half of the 19th century, New York and Massachusetts received a growing influx of poor Catholic Irish immigrants fleeing famine back home. The newcomers’ religion triggered an outburst of anti-Irish nativism in these states, but so too did their poverty. Impoverished in Ireland and sickened during the transatlantic passage, many of the Irish entered public almshouses and lunatic hospitals as paupers soon after landing.

Calling Irish paupers “leeches” who consumed public charity funds, nativist Americans quickly advocated the closure of America’s borders to indigent immigrants from Europe, especially Ireland. A nativist newspaper, invoking an Old Testament image, warned against the further entry of “offscourings of Ireland — poor, worthless hacks, who come out as paupers, to curse our land with a curse compared to which the locusts of Egypt were a blessing.” At a public almshouse, as a Massachusetts nativist put it, a lazy “Irish tramper” engaged in self-indulgence, allowed to “smoke her pipe at the expense of the Commonwealth of Massachusetts.”

To reduce the immigration of the destitute Irish, New York and Massachusetts built upon colonial poor laws for regulating the movement of the poor. These states developed laws to restrict the arrival of destitute foreigners and to deport foreign paupers back to Europe, Canada or other U.S. states. In Massachusetts, at least 50,000 persons were removed from the state between the 1830s and the early 1880s.