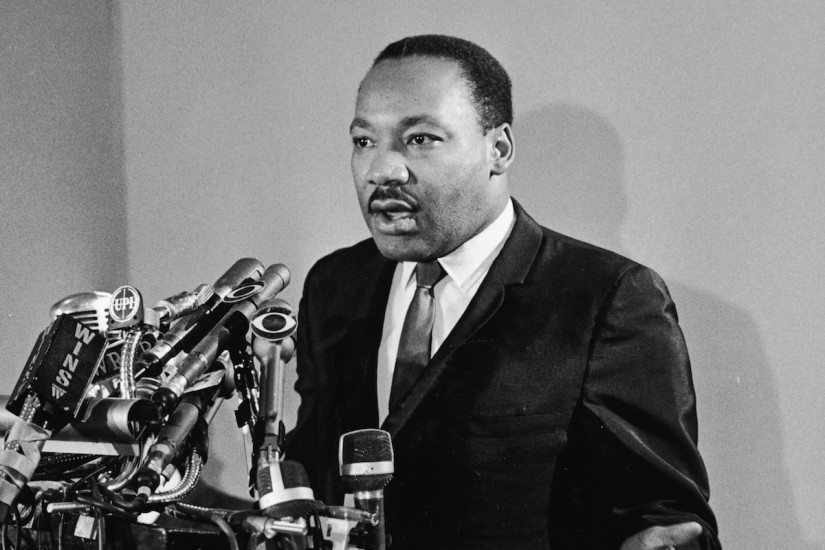 “This business of burning human beings with napalm, of filling our nation’s homes with orphans and widows, of injecting poisonous drugs of hate into the veins of peoples normally humane, of sending men home from dark and bloody battlefields physically handicapped and psychologically deranged, cannot be reconciled with wisdom, justice, and love,” he warned. “A nation that continues year after year to spend more money on military defense than on programs of social uplift is approaching spiritual death.”

Many in King’s inner circle warned against making the speech and publicly campaigning against the war. Their argument was that Johnson had risked his neck for the African-American community on issues like civil rights, health care, and welfare, and publicly condemning his foreign policy would irreparably harm the relationship between black activists and the president.

King reserved a section of his remarks to address these critics. He labeled the war an “enemy of the poor,” saying that its budget was draining anti-poverty programs; he also pointed out that it was hypocritical for him to preach nonviolence to activists at home, while watching his government reject that principle abroad. But ultimately his stance came from personal moral conviction and his devoted Christian beliefs. “Beyond the calling of race or nation or creed is this vocation of sonship and brotherhood. Because I believe that the Father is deeply concerned, especially for His suffering and helpless and outcast children, I come tonight to speak for them,” he said. “This I believe to be the privilege and the burden of all of us who deem ourselves bound by allegiances and loyalties, which are broader and deeper than nationalism and which go beyond our nation’s self-defined goals and positions. We are called to speak for the weak, for the voiceless, for the victims of our nation, for those it calls ‘enemy,’ for no document from human hands can make these humans any less our brothers.”

The backlash from a liberal establishment that had once praised King for his civil rights campaign came as hard and fast as his allies had feared.

The New York Times editorial board lambasted King for linking the war in Vietnam to the struggles of civil rights and poverty alleviation in the United States, saying it was “too facile a connection” and that he was doing a “disservice” to both causes. It concluded that there “are no simple answers to the war in Vietnam or to racial injustice in this country.” The Washington Post editorial board said King had “diminished his usefulness to his cause, his country and his people.”