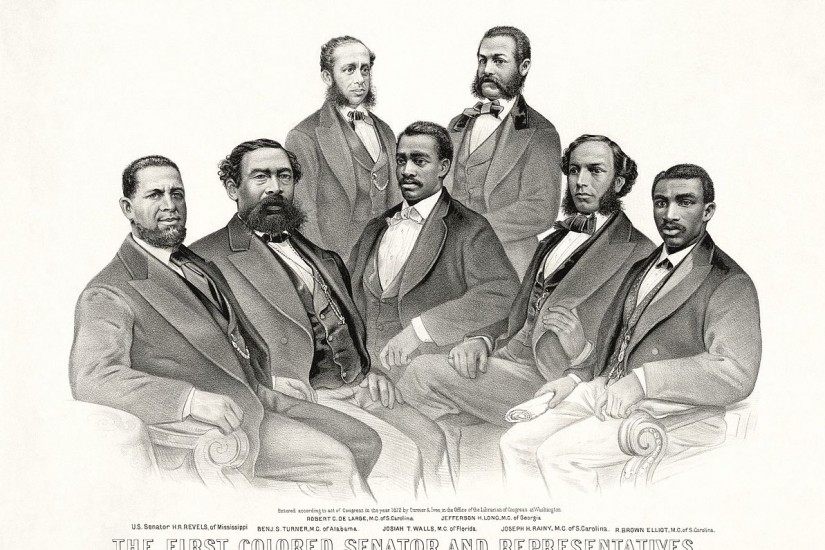 &#34;The First Colored Senator and Representatives in the 41st and 42nd Congress of the United States.&#34; (L-R: Senator Hiram Revels of Mississippi, Representatives Benjamin Turner of Alabama, Robert DeLarge of South Carolina, Josiah Walls of Florida, Jefferson Long of Georgia, Joseph Rainey and Robert B. Elliot of South Carolina.)
Library of Congress
…

The antebellum South had long been a conservative bastion, characterized by its dogged commitment to states’ rights, low taxes, strict construction of the Constitution, and especially the maintenance of traditional gender roles and white supremacy. Fearful that Abraham Lincoln’s presidential election threatened slavery, white South Carolinians in late 1860 had gathered just a few blocks from the Charleston Club House to secede from the United States, sparking four bloody years of civil war.

Less than a decade later, however, former slaves and freeborn blacks helped choose delegates to state constitutional conventions across the South, including the one in Charleston. These groundbreaking 1867 and 1868 elections, which followed a congressional mandate, gave birth to real, if short-lived, interracial democracy. African Americans occupied one-quarter of the seats in the conventions as a whole and a majority of them in Louisiana and South Carolina.

The conventions drafted constitutions reflecting the progressive priorities of their mostly Republican delegates, whose party represented the left wing of American politics, particularly on race. Whereas postbellum Democrats campaigned on racist platforms, most Republicans were committed to using government to secure black rights.

All of the new constitutions guaranteed black men the right to vote, a feature that for a time reshaped the American body politic. As late as 1866, less than 1 percent of African American men in the United States had been eligible to vote, and not one of them lived south of the Mason-Dixon Line. Up north and out west, white citizens had shown little interest in expanding voting rights, rejecting colorblind suffrage initiatives in Connecticut, Ohio, and Kansas in 1867. Yet by the following year, hundreds of thousands of black men were voting in national, state, and local elections held in the seven ex-Confederate states that had by then ratified their constitutions—all before the 15th Amendment enfranchised black men throughout the country in 1870.