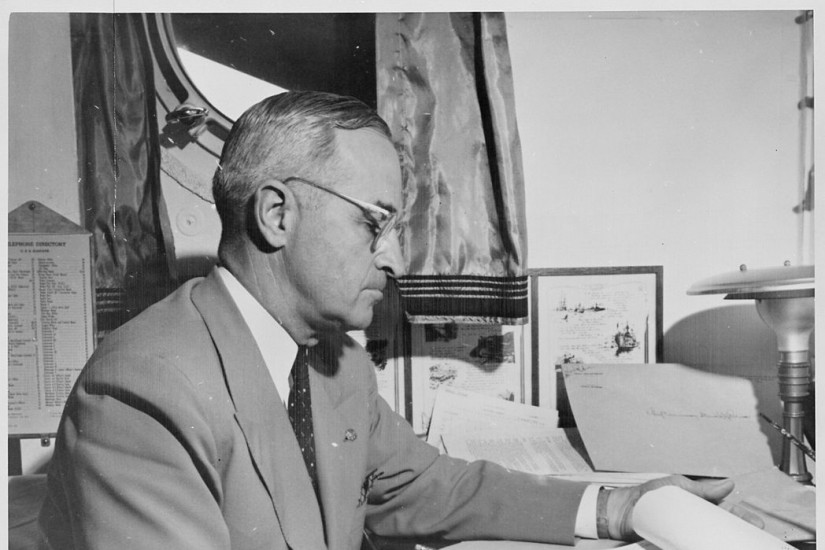 President Truman at his desk on the U.S.S. Augusta, returning from the Potsdam Conference on August 6, 1945, the same day as the atomic bombing of Hiroshima, Japan.
Harry S. Truman Library / Wikimedia Commons
…

In the fifth draft, however, a change occurs. The language about Hiroshima as “purely” a military target still remains. But a new bit of text has been added:

Its production and use were not lightly undertaken by this Government. But we knew our enemies were on the search for it. We now know they were close to finding it. And we knew the disaster that would come to this nation, to all peaceful nations, to all civilization, if they found it first. […]

We won the race of discovery against the Germans.

This is an interesting addition: it is the justification for having made it (the Nazis were going to make one) and having used it (we wanted to save lives). That it takes until the fifth draft — the last one in the archival file — for this to appear is fascinating. It is almost as if the speech drafters realized, all of the sudden, that they were going to have to account for its use, to make a case for the manufacture and use of the bomb that went further beyond their original one.

So when and where did this language enter into this text? Fortunately, there is another piece of documentation in the file that helps us. The Assistant Secretary of State (and former Librarian of Congress) Archibald MacLeish sent a letter to Rosenman dated August 8th, with “a paragraph which has some ideas you might wish to use about the atomic bomb.” It is not an exact match for the fifth draft’s language but it is so close on many points as to be the obvious source: “Its production and its use were not lightly undertaken by this Government. … Only the certainty that the terrible destructiveness of this weapon will shorten the agony of the war and will save American lives has persuaded us to use it against our enemies.”

So that indicates clearly that the fifth draft was finished sometime after MacLeish sent his memo on August 8th. What happened on August 8th that would provoke MacLeish and others to think they needed to justify the creation and use of the atomic bomb? On the morning of August 8th, the first damage reports came back from Japan. These included the famous aerial photograph of Hiroshima, which was shown to Truman by Stimson that morning.