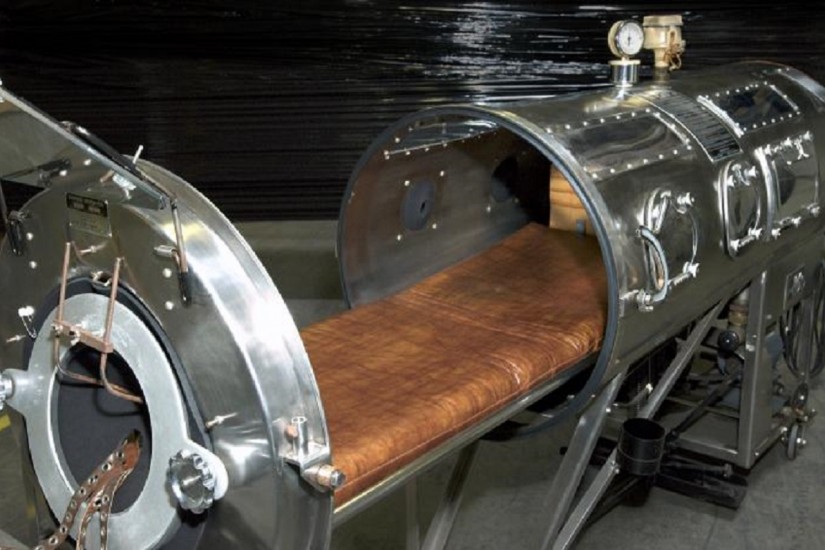 An iron lung, a device used by polio patients in the 1950s.
Centers for Disease Control / Public Health Image Library

... for the rest of their lives, or have issues later in life when overworked neurons burn out, a condition called post-polio syndrome. “I breathe 20 percent of what you breathe with every breath,” Lillard explained to me. “You still have the neurons that work the muscles that you breathe with.”

... for the rest of their lives, or have issues later in life when overworked neurons burn out, a condition called post-polio syndrome. “I breathe 20 percent of what you breathe with every breath,” Lillard explained to me. “You still have the neurons that work the muscles that you breathe with.”

Let it breathe for you

Lillard offered to let me try out her iron lung about an hour after I met her. She showed me how to operate the ad hoc mechanisms that would lock me into the tank and tighten the collar around my neck like a camera shutter—tight enough that no air can escape, but loose enough that I don’t choke myself.

I climbed into the bed tray, slipped my head through the hole, tightened the collar, then flipped the switch that controls the pulley that closes the tray into the main canister. As the system locked me in, I had a quick wave of claustrophobic panic and my instinct was to take deep breaths, but a motor was controlling that. I tried to describe the feeling to Lillard, but the machine was inhaling for me, so no sound came out. I had to wait a moment for the release.

“Let the air out of your lungs and let it breathe for you,” Lillard said. “Imagine if you were real tired of breathing, how good that would feel—if you were struggling to take a breath.”

Being in an iron lung was the most relief and discomfort I have ever felt at the same time. I slowly got used to the mechanical rhythm and began feeling a little relaxed. I tried closing my mouth, and air still rushed in through my lips. I felt like a vacuum cleaner.

As I climbed out, Lillard warned me to be careful and not break any of the switches or pulleys. If I damaged anything, and she wasn’t able to get someone to repair it within a few hours, she might not have made it through the night. A few weeks earlier, the collar-opener broke and she was trapped inside. Fortunately, her housekeeper was there to help her force it open, and a friend who does custom metal fabrication for motorcycles, planes, and other machines, Tony Baustert, came a few hours later to repair it.

Recently, an ice storm knocked her power out for three days and the generator malfunctioned. The fire department came over but they wouldn’t run a power line from down the street or provide a temporary generator, Lillard said. Fortunately, one of the firefighters came by when he was off-duty and fixed the generator. During the panic, Lillard thought about Dianne Odell, a polio survivor who died in her iron lung in Memphis in 2008, after she lost power during a storm. Her father and brother-in-law took turns pumping the bellows by hand but couldn’t sustain the rhythm long enough to keep her alive.

Understandably, Lillard lives in a constant state of anxiety over the functionality of her iron lung. But she said the company responsible for servicing the device, Philips Respironics, hasn’t been much help. She recalls one time when a repair person disassembled the machine to make a repair, then ...