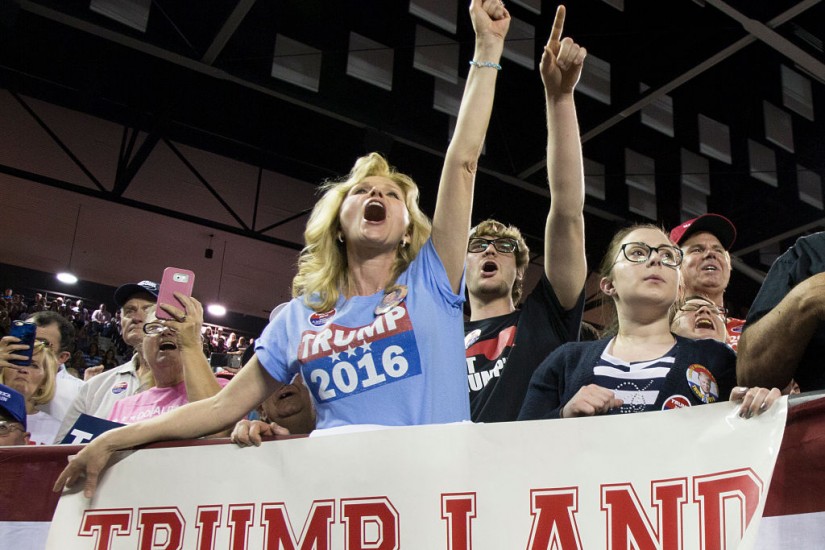 A supporter reacts to Republican presidential candidate Donald Trump as he speaks to a mostly white audience during a rally at Valdosta State University in Georgia.
Mark Wallheiser/Getty Images
…

Are working-class white voters shooting themselves in the foot by making common cause with a political movement that is fundamentally inimical to their economic self-interest? In exchange for policies like the new tax bill, which several nonpartisan analyses conclude will lower taxes on the wealthy and raise them for the working class, did they really just settle for a wall that will likely never be built, a rebel yell for Confederate monuments most of them will never visit, and the hollow validation of a disappearing world in which white was up and brown and black were down?

If they did accept that bargain, why? Or are we missing something? Might working-class whites in fact derive some tangible advantage from their bargain with Trump? Is it really so irrational to care more about, say, illegal immigration than marginal income tax rates?

These are good questions. They’re also not new ones. The historian W.E.B. Du Bois asked them more than 80 years ago in his seminal work on Reconstruction, when he posited that working-class Southern whites were complicit, or at least passive instruments, in their own political and economic disenfranchisement. They forfeited real power and material well-being, he argued, in return for the “psychological” wages associated with being white.
Since then, the issue has inspired a vibrant debate among historians. Until last year, most agreed with Du Bois that the answer to the question was not so simple as “yes” or “no”—that whiteness sometimes conferred benefits both imaginary and real.

In the age of Trump, we’re once again pressure-testing Du Bois’ framework. As one might expect, it’s complicated. White identity pays dividends you can easily bank, and some that you can’t.