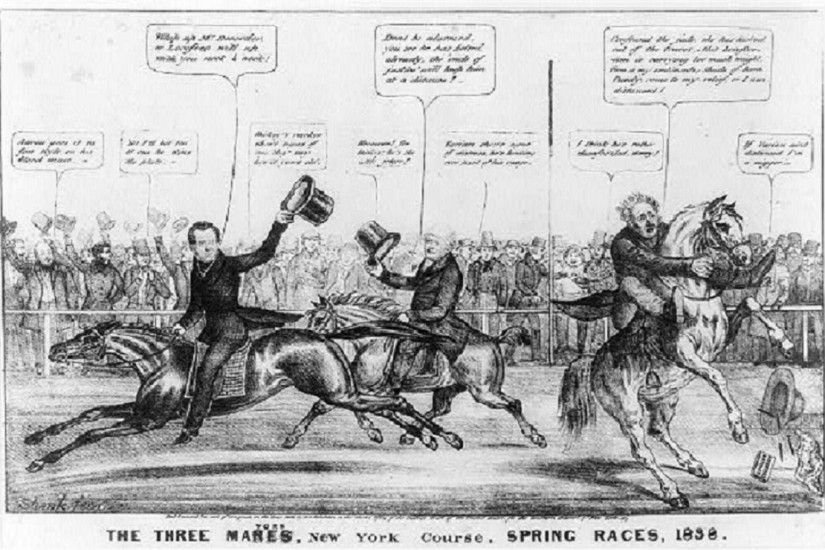 In 1832, horse racing was by far America’s most popular spectator sport. So when horses named Andrew Jackson and Nullifier appeared at the same racetrack in Richmond, Virginia, thousands of people saw their sporting and political interests overlap. The horses’ names reflected the most divisive political debate of the year, a constitutional crisis over “nullification.” At issue was whether the state of South Carolina could refuse to abide by a federal import tax backed by President Andrew Jackson. The situation was so serious that Vice President John C. Calhoun soon resigned his post and returned home to South Carolina to help mobilize troops in anticipation of a federal invasion. On the racetrack, at least, Jackson won and Nullifier lost.

Whatever you might think about President Trump’s recent crusade against activist athletes, the idea that sports should be divorced from politics is a relatively new one. We can scarcely imagine a football game now between, say, the Tax Cutters and the Bernie Sandersites or an NBA matchup featuring the Golden State Liberals and the Indiana Conservatives. Yet explicitly political sports were the norm in American life for the nation’s first 125 years. At least two other competitive racehorses carried Jackson’s name in 1832, and past races had featured horses named for all sorts of politicians and parties, such as when “Anti-Democrat” and “Little Democrat” graced the same track in Lancaster, Pennsylvania, in the first decade of the 1800s. Jackson himself once pitted his fighting cocks against those of a rival political faction as part of a July Fourth celebration outside Nashville, Tennessee.

The current debate over sports and politics has largely ignored this early history. Black American athletes were not the first to politicize sports when they made it a stage for protest during the 20th century. In fact, white men had used sports to rally political support since before the American Revolution. It was only in the early 1900s—when black athletes threatened to harness this tradition—that divisive politics were stripped from American sports.