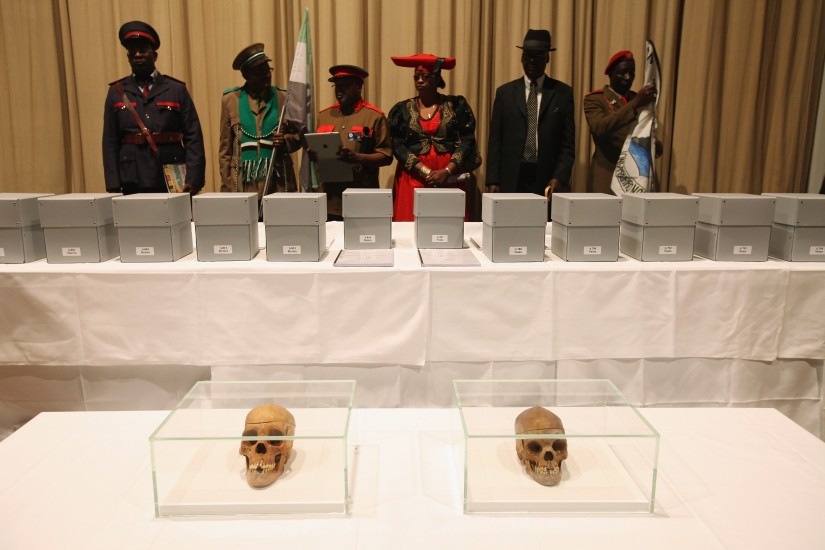 Members of a delegation from Namibia stand over 20 skulls from Herero and Nama tribespeople taken in 1904 by German colonists.
Sean Gallup/Getty Images

On a warm morning last September, a dozen Herero men and women paid a visit to the American Museum of Natural History, in Manhattan. The men wore dark suits and ties, like guests at a funeral. The women wore colorful dresses and hats, following a tradition from Namibia, their home country, in southern Africa. They had come to view relics of a tragic episode in their nation’s history, and to ask the museum, after almost a century, to give them back.

Kavemuii Murangi, an education researcher who lives in Maryland, arrived wearing a gray suit and dark glasses that hid his gentle eyes. Inside the museum, several curators led Murangi and his companions to a private room upstairs. A table was covered with cardboard boxes, which the curators invited them to open when they felt ready. Inside the boxes were human skulls and skeletons. On many of the skulls, four-digit numbers had been scrawled above the eye sockets. Many of the visitors wept at the sight. “We looked at each other, we talked to each other, we hugged each other,” Murangi told me afterward. They were staring at remains of their own people.

A little more than a hundred years ago, German colonists stole these bones from what they called German Southwest Africa, following a Herero rebellion, in 1904. General Lothar von Trotha had moved quickly and brutally to put down the uprising. “Within the German boundaries, every Herero, with or without firearms, with or without cattle, will be shot,” he wrote in his Vernichtungsbefehl, or extermination order. “I won’t accommodate women and children anymore.” In what has been called the first genocide of the twentieth century, colonists pushed Herero into the desert and forced others into concentration camps. Sixty-five thousand Herero died. Similar tactics killed ten thousand Nama men and women. (Both groups have called on Germany to pay reparations, and will appear in U.S. federal court on January 25th in an attempt to force the country to do so.)