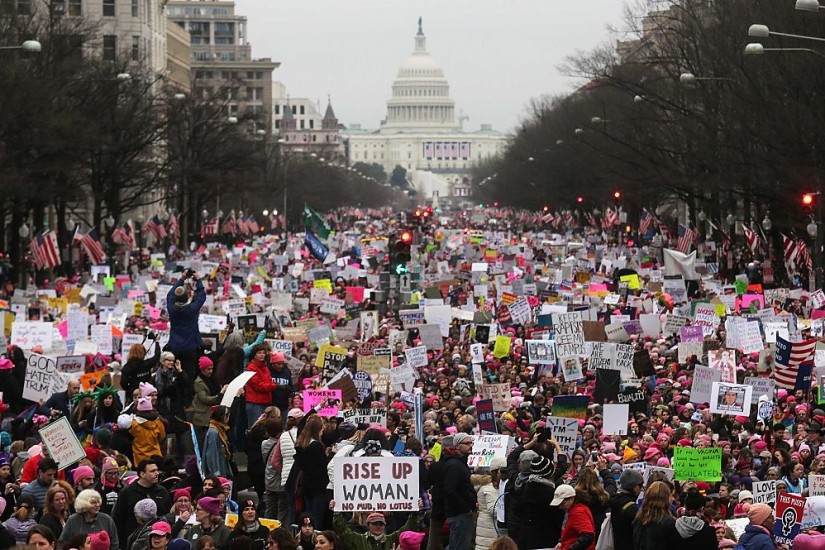 Protesters walk during the Women's March on Washington, with the U.S. Capitol in the background, on January 21, 2017 in Washington, DC.
Mario Tama/Getty Images
…

Isaac Chotiner: What have you made of the generational tensions or differences between different waves of feminism that have arisen lately?

Katha Pollitt: I’m a little bewildered by it, for several reasons. One is that second-wave feminist is being used as a synonym for woman writer of a certain age. I mean, Katie Roiphe is not a second-waver. Daphne Merkin, Andrea Peyser—these women are not feminists at all, in my view. And they are not old enough to be second-wavers. I mean Katie Roiphe was minus 5 years old when The Feminine Mystique was published. So I think I would wish that the young women who are making this claim would read a little bit of history. I found it very offensive when Katie Way, who was the author of that piece on Babe.net about Aziz Ansari, insulted Ashleigh Banfield by calling her a “burgundy lipstick bad highlights second-wave feminist has-been.” I mean, it’s at that point you want to say, “Hello, my pretties, soon you too will be wearing the burgundy lipstick.”

The second point is that the very concepts that these young women are relying on—consent, date rape, acquaintance rape, sexual harassment, believing women, intimate questions of power relations between the sexes—where do they think they got these ideas? They got them from the second wave, those old harridans who are now, in fact, 75 and 80 years old. So that does bother me—the lack of history and the ageism. I mean, the young people always have this idea: It’s like no one ever had sex before I had sex, and no one had these ideas before I had them.

Putting aside the debate over who is a feminist, do you feel like, broadly speaking, you’ve noticed generational differences in the way people who are older versus younger write and think about those things?

I think there’s a difference that I would call the mother-daughter difference. And it’s this: Mothers tell their daughters to avoid sketchy guys and situations. They try to be realistic about what can happen in this fallen world. That is not the same as saying that women are to blame when they’re a bit naïve or shy and tongue-tied in a situation that becomes sexual. And I think those things are being confused.