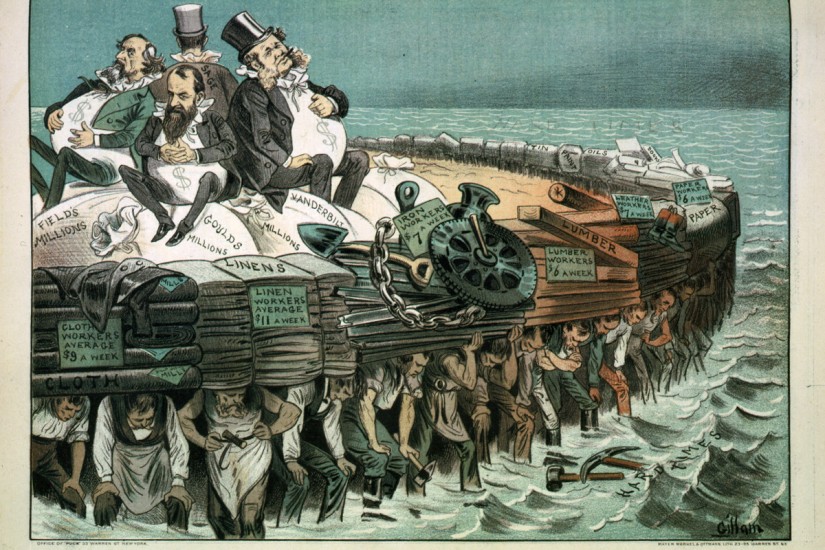 An 1883 cartoon showing Cyrus Field, Jay Gould, Cornelius Vanderbilt, and Russell Sage, seated on bags of "millions," on a large raft that is being carried by workers of various professions.
Mayer Merkel/Library of Congress

Let’s start with a poll: Which person described below would you call an “elite”?

The answer you chose may say a great deal about your political point of view and the cultural assumptions that undergird them.

Choice A describes President Donald Trump, who built his campaign on angry denunciations of “elites.” Choice B, of course, is a thumbnail sketch of one of the primary targets of Trump’s rage: President Barack Obama.

2016 might well be called the Year of the Populists around the world. From the Philippines to Poland, from Brexit to Trumpismo, politics across the globe were upended by voters angry at … well, any number of things. Lumping them together, the commentariat called all these angry voters “populists” and it has expended a good deal of energy defining the species.

Whatever else they may or may not have in common ideologically, these populists share an antipathy toward “elites.” But we haven’t spent nearly as much time defining just who those people are, what they’ve done to deserve the wrath of voters, and what the implications might be when voters turn on them.
Americans have a funny relationship with elites.

We worship our “elite athletes.” We swoon patriotically over our “elite military units” like the Green Berets and SEAL teams. We seek out “elite” doctors when things go wrong with our health.

But “elite” has become an epithet lately in our political discourse. The elites are, ipso facto, the enemy of the “people.” They are responsible for what has gone wrong, what is going wrong, and what threatens to go wrong in the future.

But who are “they,” more precisely, this cabal of elites who run the show, game the system, and subvert our democracy in the process? Part whipping-boy, part straw-man, the elite serve a rhetorical purpose for sure, but tracing just who has been on the receiving end of the epithet tells us interesting things about how American politics have changed over the decades.