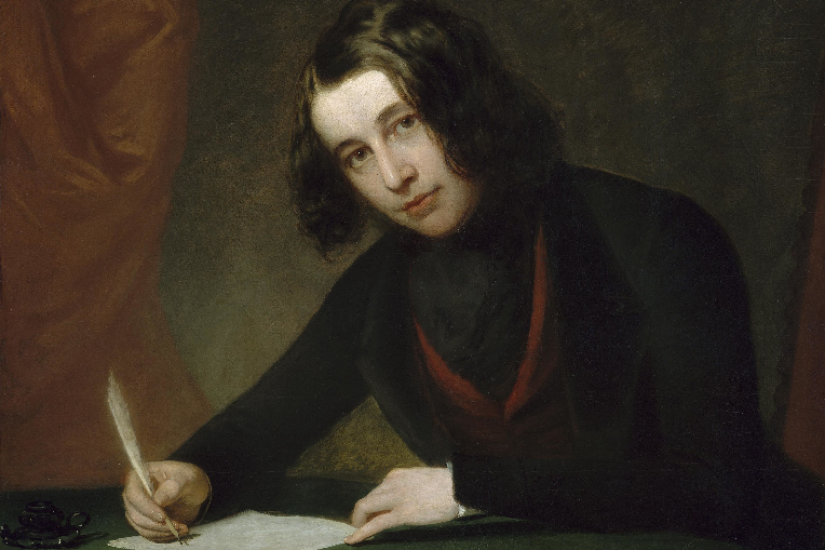 Detail of a portrait of Charles Dickens made by Francis Alexander in Boston during Dickens’s 1842 trip to America.
Wikimedia Commons

Charles Dickens’ unfettered joy at first arriving in Boston Harbor in 1842 reads like Ebenezer Scrooge’s awakening on Christmas morning. Biographer Peter Ackroyd reports that he flew up the steps of the Tremont House Hotel, sprang into the hall, and greeted a curious throng with a bright “Here we are!” He took to the streets that twinkling midnight in his shaggy fur coat, galloping over frozen snow, shouting out the names on shop signs, pulling bell-handles of doors as he passed—giddy with laughter—and even screamed with (one imagines) astonishment and delight at the sight of the old South Church. He had set at last upon the shores of “the Republic of my imagination.”

America returned his ardor. Though not quite 30, Dickens was a literary rock star, the most famous writer in the world, who landed like a conquering hero in a country swept up in an extreme “Boz-o-mania”—the hype of his tour then unprecedented in American history. He wrote his best friend, John Forster, that he didn’t know how to describe “the crowds that pour in and out the whole day; of the people that line the streets when I go out; of the cheering when I went to the theatre; of the copies of verse, letters of congratulations, welcomes of all kinds, balls, dinners, assemblies without end?” When Bostonians renamed their city “Boz-town,” New Yorkers determined to “outdollar . . . and outshine them.” Their great Boz Ball boasted flags, flowers, festoons, wreaths, a huge portrait of the author with a bald eagle overhead, chandeliers hung by gilded ropes, 22 tableaux from the great author’s works, and 3,000 guests, who consumed 50 hams, 50 tongues, 38,000 stewed and pickled oysters, and 4,000 candy kisses. “If I should live to grow old,” Dickens said, “the scenes of this and other evenings will shine as brightly to my dull eyes 50 years hence as now.”

A sketch made of Dickens during his visit to America.The Spirit of the Times wrote of it: “This most extraordinary, fashionable, brilliant, unique, grotesque, enchanting, bewitching, confounding, eye-dazzling, heart-delighting, superb, foolish and ridiculous fete . . . came off at the Park Theatre, New York, on Monday evening last.” But in a prescient endnote, the reporter predicted, “Such was the tom-foolery of silly-minded Americans, and such the ridiculous homage paid to a foreigner, who will in all probability return home and write a book abusing the whole nation for the excesses of a few consummate blockheads.”

His love affair with an idealized America was short-lived and hard-felt. Apart from the country’s great writers, he found Americans malodorous, ill-mannered and invading his privacy. “I am so enclosed and hemmed about with people, that I am exhausted from want of air,” Dickens complained to Forster. “I go to church for quiet, and there is a violent rush to the neighborhood of the pew I sit in. I take my seat in a railroad car, and the very conductor won’t leave me alone. I can’t drink a glass of water without having a hundred people looking down my throat.” On a tour of the Great Lakes he woke to a crowd gawking through his steamboat cabin window while his wife slept and he washed.

“He found Americans vulgar and insensitive, braggarts, hypocrites, and acquisitive beyond all imagining.”

He was repulsed by Americans’ table manners and the tobacco spit everywhere he looked—on even the sidewalks of the nation’s capital, where he found party politics contaminating everything, its leaders “the lice of God’s creation,” and “despicable trickery at elections; under-handed ...