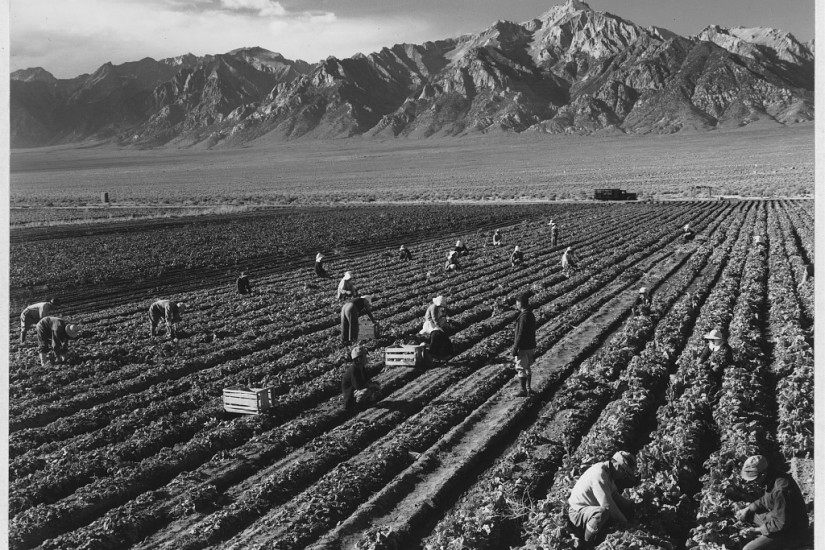 Japanese-Americans held in internment camps working the fields they once owned (1943).
Ansel Adams/Library of Congress

Fifty years ago today, World War II was brought home with terrible reality to those of us living on the West Coast. At dawn, teams of FBI agents in Los Angeles raided a Japanese-American fishing community at nearby Terminal Island on the first day of the nation's new enemy alien registration program.

It was only the beginning: On Feb. 19, President Roosevelt signed Executive Order 9066 authorizing the secretary of war to designate certain coastal "military areas" and to exile "any and all persons" from them. Almost overnight, many of our neighbors of Japanese ancestry disappeared. Soon 120,000 West Coast Japanese-American citizens found themselves herded into 10 "relocation" camps for the duration of the war.

The government has since paid $1.2 billion in reparations to 66,000 survivors, and the mass internment is widely regarded as a disgraceful moment of national paranoia and racial prejudice. But a major motivation has remained largely unspoken and generally concealed from the public.

Based on an accumulation of evidence, we now know that the government's action was partially initiated by California corporate agribusiness interests hoping to satisfy their own lust for land while ridding themselves of competition from the state's most productive family farms.

Japanese-American farmers were a huge presence on the pre-war West Coast, producing more than 40 percent of California's commercial vegetable crop alone. A June 1942 federal report noted that "the Japanese people were the most important racial minority group engaged in agriculture in the Pacific Coast region. Their systems of farming, types of crops and land tenure conditions were such that their replacement by other farmers would be extremely difficult . . . . The average value per acre of all West Coast farms in 1940 was $37.94, whereas that of Japanese farms was $279.96 . . . . Three out of every four acres of Japanese farm lands were devoted to actual crop production, whereas only one out of every four acres of all farm land in the areas was planted in crops."

But despite the nisei farmers' importance, the federal dragnet that swept up Japanese-American citizens also gathered in their highly productive lands. Farm Security Administration (FSA) records indicate that 6,664 pieces of nisei agricultural property, totaling 258,000 acres, were involved in the evacuation process and placed under the agency's jurisdiction.