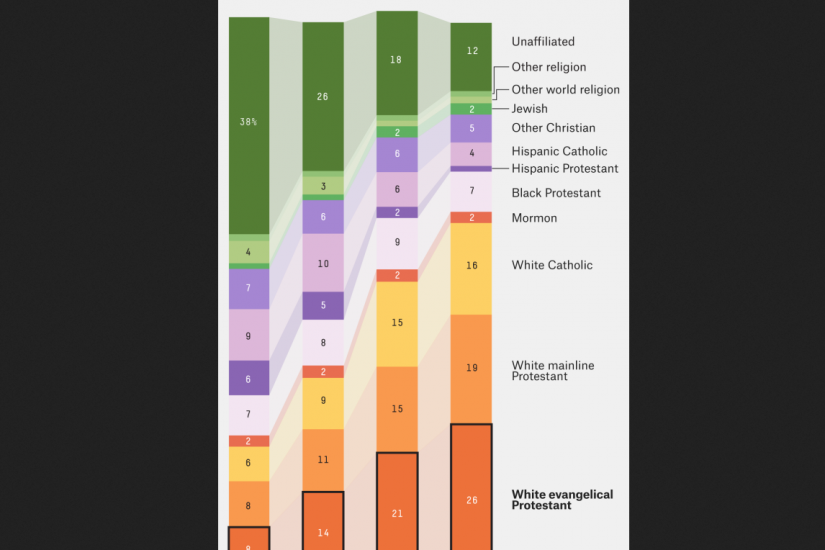 In 2016, white evangelical Protestants strongly supported Donald Trump, a septuagenarian candidate who promised to make America great again, to bring back “Merry Christmas” and to protect, cherish and defend America’s Christian heritage. White evangelicals have consistently told pollsters that life in the U.S. has gotten worse since the 1950s. Nostalgia seems to be animating much of white evangelical politics.

In the aftermath of the 1960s, scholars began to note that while more liberal mainline Christian churches appeared to be shedding members, conservative and more traditionally minded churches were unaffected. In 1972, sociologist Dean Kelley published the study “Why Conservative Churches are Growing,” arguing that evangelical churches were prospering because they placed greater demands on their members. Subsequent research published decades later appeared to support this claim. Conservative churches that offered a rigorous theology were thriving, arguably because of it.

It’s a narrative that has gained widespread acceptance and has tremendous staying power. Shortly after the Broadway hit “The Book of Mormon” was released, David Brooks, for example, argued that strict observance to a consistent theology is essential for the vitality of religious communities. “The religions that grow, succor and motivate people to perform heroic acts of service are usually theologically rigorous, arduous in practice and definite in their convictions about what is True and False.”

Over the past couple of decades, though, Americans have become far more accepting on nearly every issue that fits under the rubric of sexual morality.