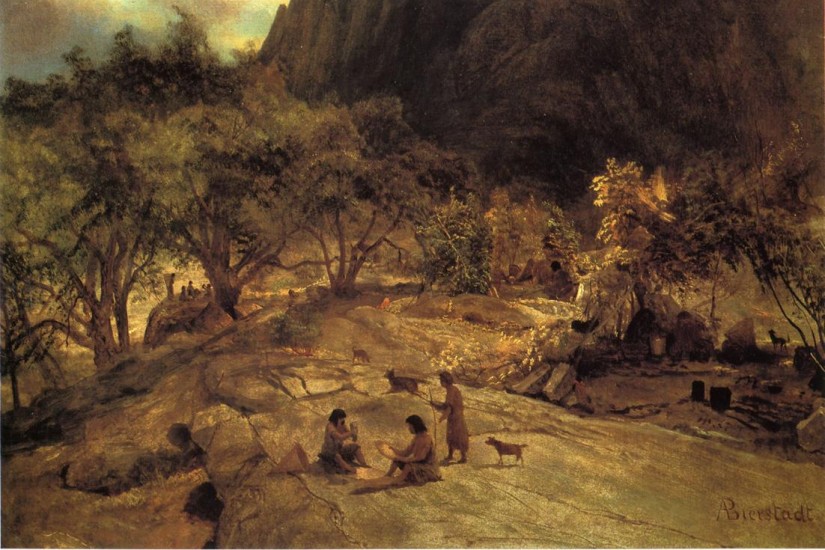 Today, the foundational myth of America’s National Parks revolves around the heroic preservation of “pristine wilderness,” places supposedly devoid of human inhabitants that were saved in an unaltered state for future generations. This is obviously a falsehood: Places like Yosemite were already home to thriving communities that had long cherished—and changed—the environment around them. Catlin’s paintings are vivid reminders that the vast expanses of our western frontier were not empty, but rather brimming with human cultures.

Though the National Park Service prevented wholesale industrialization, they still packaged the wilderness for consumption, creating a scenic, pre-historical fantasy surrounded by roads and tourist accommodations, all designed to mask the violence inherent to these parks’ creation. More than a century later, the United States has done little to acknowledge the government-led genocide of native populations, as well as the continued hardships they face because of the many bad-faith treaties enacted by the U.S. government. This story is an elemental part of our National Park system, the great outdoor museum of the American landscape, but the myth continues to outweigh the truth. How did the National Park Service evict Yosemite’s indigenous communities and erase their history, and can it come to terms with this troubling legacy today?

In an 1833 editorial, Catlin made a loose proposal for a new kind of American park, hoping that future generations would be allowed to visit native groups in their natural surroundings—“a nation’s Park containing man and beast, in all the wild and freshness of their nature’s beauty!” Catlin went on, describing “a magnificent park, where the world could see for ages to come, the native Indian in his classic attire, galloping his wild horse, with sinewy bow, and shield and lance, amid the fleeting herds of elk and buffalo.”

As author Mark David Spence points out, while Catlin was one of few Americans to propose protecting indigenous people, his imagined park would still have exploited native cultures. “Catlin’s vision of ‘classic’ Indians grossly ignored the cultural dynamism of native societies, and his park would have created a monstrous combination of outdoor museum, human zoo, and wild animal park,” Spence writes in Dispossessing the Wilderness: Indian Removal and the Making of the National Parks.