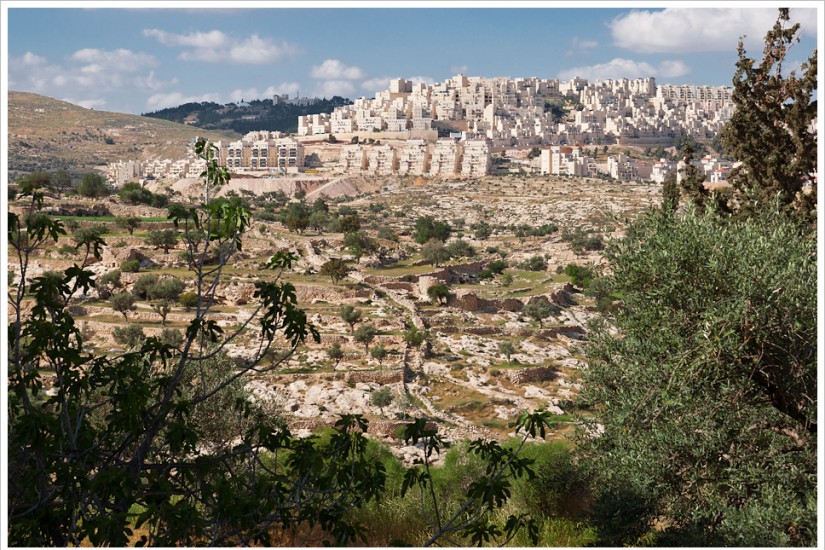 An Israeli settlement in the West Bank, viewed from Bethlehem in 2011.
flickr.com/libertinus
…

R&P: What do you have to ignore in order to hold on to a liberal vision while living as a settler in the West Bank?

SH: The First Intifada [starting in the late 1980s] is that moment when people have to come face to face with the reality of what the settler project is about, or the potential pitfalls of the settler project. When you could live in the Occupied Territories without a lot of friction with your neighbors, maybe you didn’t really have to think about some of the illiberal elements of this—disenfranchising either local Palestinians, or, more broadly, the goals of Palestinian self-determination in the West Bank.

When you have to come face-to-face with serious violence, it becomes a little bit harder.

If you try to stay in spite of all those things, the Israeli-Palestinian conflict increasingly becomes a zero-sum game. I think that the average person has to give up on that idea and see themselves as the vanguard of protecting the state of Israel as a whole. And there’s a certain truth to that: Settlers often do bear the brunt of Palestinian violence.

The whole book is really about the cognitive dissonance of people who say that they can still be a liberal and live in the Occupied Territories. Most people are not going so far as to say, “Oh, I’m going to give up on liberalism.” In fact they double down on it and say that I absolutely am still a liberal, and it’s the situation around me here that is the problem.

R&P: You see this with people like Rabbi Shlomo Riskin, an American-born leader in the settlement movement. Riskin marched in Selma and still actively invokes Martin Luther King.

What kind of role do invocations of things like the Civil Rights Movement serve for settlers?

SH: They’re huge! I mean, these are the formative moments for that generation of American immigrants. A whole chapter of the book is drawn from [American settlers’] understanding of how to mobilize human rights discourses for their project. A lot of what they learned about organizing and public relations is in some ways a holdover from the Civil Rights Movement.

These are people that I would go to their house, and they would still have a copy of Saul Alinsky on their bookshelf. They don’t share that political ideology anymore, but they learned the tactics.