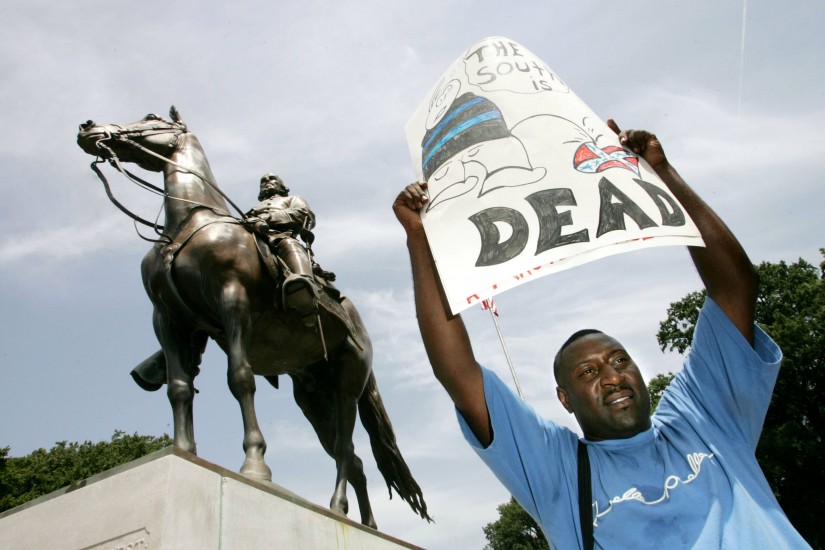 Maurice Spivey protests against the name of Nathan Bedford Forrest Park in front of his statue in Memphis, Tennessee (2005).
Carlo Allegri/Getty Images
…

For all the ways Forrest inspires alternative facts, nowhere is the gap between myth and reality more jarring than in Memphis. In a city whose original town squares — Exchange, Market, Court, and Auction — carry the stain of slavery, Downtown Memphis is brimming with historical markers; many buildings boast plaques noting their inclusion in the Register of Historic Places. Yet Forrest’s years as a slave trader are conspicuously absent. There is no sign to hint where Forrest’s “Negro Depot” once stood. The address of the famed slave mart at 87 Adams no longer exists.

Just down the street, however, one of the Tennessee Historical Commission’s signature signs marks Forrest’s Early Home. “Following marriage in 1845, he came to Memphis, where his business enterprises made him wealthy,” it reads, with no further specifics. A few blocks from there, in what used to be Confederate Park, a bronze shield is engraved with highlights from Forrest’s “grand strategic raid” on Memphis in 1864. But there is no mention of the massacre at Fort Pillow that same year.

Just as his early biographers peddled an image of Forrest as a uniquely kind slaveholder — black people “begged him to purchase them” and “were proud of belonging to him” — countless writers have questioned Forrest’s culpability for the Fort Pillow Massacre. After a congressional probe deemed the event an “indiscriminate slaughter,” Forrest’s defenders dismissed the findings for relying on the testimony of “ignorant negroes.”

There is no question that Union troops had already surrendered when Confederate soldiers attacked them at Fort Pillow. One man described how “after we had given up the fort entirely, the guns thrown away and the firing on our part stopped, they still kept up their murderous fire, more especially on the colored troops.” There were descriptions of torture and sadism. “They nailed some black sergeants to the logs and set the logs on fire,” one witness testified. “Did they kill them before they burned them?” he was asked. “ No, sir, they nailed them to the logs; drove the nails right through their hands.”

The hundreds of soldiers killed at Fort Pillow were predominantly former slaves fighting for the Union. One recalled Forrest at the scene, telling “some negro men there that he knew them; that they had been in his nigger yard in Memphis.” Forrest spent the rest of his life denying fault for massacre.