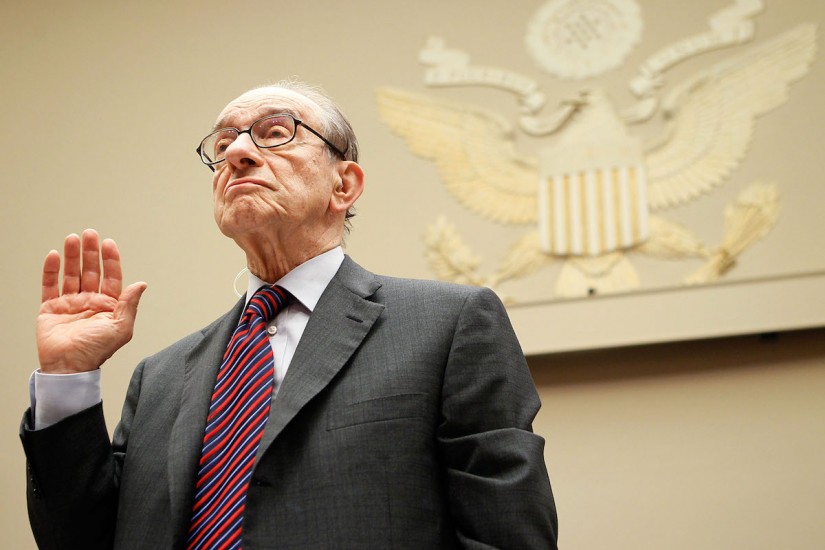 Former Federal Reserve Chairman Alan Greenspan is sworn in before a congressional hearing on the 2008 economic crisis.
Alex Wong/Getty Images
…

In his own way, Greenspan had inherited in to Rand’s short-sightedness, egocentrism and complete lack of understanding of “the behavior of individuals and societies.” Though he would play his delusions out in a very different arena and not, so far as is generally known, be going around slapping anybody in the foyer. His big scene would come forty years later, in a Congressional hearing room.

Greenspan was no mere theorist when it came to Objectivism and was, in time, in a position to put its theories into practice on a massive scale. He believed fervently that business should not be regulated by us parasitic consumers, and had written to that effect from the ’60s onward. In 1987, he became Fed Chairman, succeeding the towering (and wholly unobjectivist) Paul Volcker. The results of his Objectivist convictions, made manifest in that role, were far-reaching. It has been argued in many quarters that Greenspan’s rock-ribbed laissez-faire policies resulted in a succession of bubbles—first in the dot-com boom, then in real estate and credit—that led directly to the 2008 crisis.

Part of the blame lies in his attitude toward derivatives. The efforts of the CFTC’s Brooksley Born to compel the regulation of derivatives trading began in 1994, but came to nothing owing largely to Greenspan’s objections. After the Enron debacle, which, thanks to “the smartest guys in the room,” left California holding the bag on about $9 billion of natural gas bills, Senator Diane Feinstein made herself very busy pestering Greenspan about the need to regulate derivatives. In 2004, Alan shrugged: he wrote to Congress in response to Senator Feinstein in what had by then become the signature Greenspan style of floaty, oracular, narcoleptic polysyllables:

Businesses, financial institutions, and investors throughout the economy rely upon derivatives to protect themselves from market volatility triggered by unexpected economic events. This ability to manage risks makes the economy more resilient and its importance cannot be underestimated. In our judgment, the ability of private counterparty surveillance to effectively regulate these markets can be undermined by inappropriate extensions of government regulations.
If the Enron disaster had not already made the hollowness of this argument horribly apparent, the financial crisis four years later could leave no doubt.
…
View on The Awl
View Connections