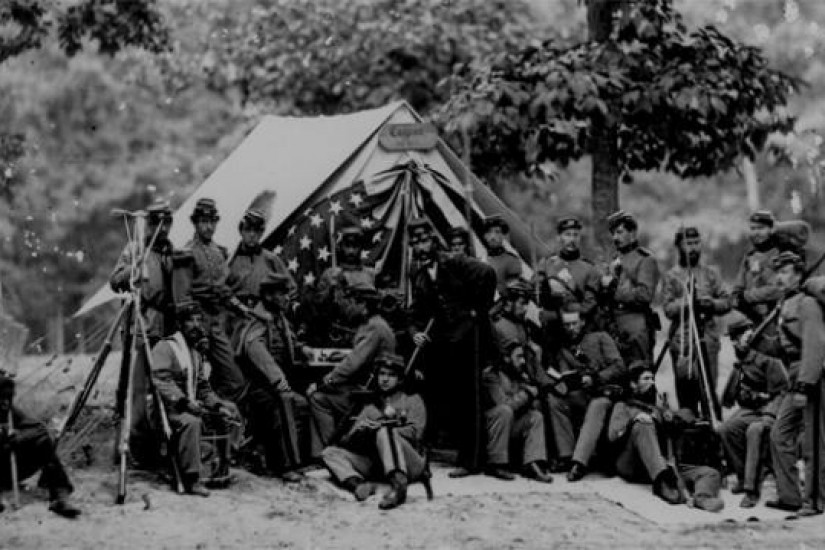 Engineers of the 8th New York State Militia in front of a tent (1861).
Timothy H. O’Sullivan/Library of Congress
…

EF: They talk about its doom, but as Lincoln said, it might last a hundred more years. It’s doomed, but maybe way in the future. One of the advantages of the internationalist perspective that Matt talked about in the book is that it does make you realize that slavery was expanding not only in the United States, but also in Brazil and Cuba. Those were the three great slaveholding societies of the nineteenth century.

MK: Here’s a useful little fact: in 1860, on the eve of the American Civil War, there were more slaves in the Western Hemisphere than at any other point in history. Slavery was not going away; it was not dying out, even though it had been abolished in Haiti, of course, by revolution, in the British empire, in the Latin American nations, which had rebelled against Spain. It was still dynamic and growing, so that was the frame of mind that these Southern slaveholders brought into this period.

There’s a character in the book — a senator from Virginia who’s the chairman of the finance committee across the 1850s, one of the most powerful guys in Washington. He’s kind of lost in the sands of time, Robert Mercer Taliaferro Hunter.

He gave a speech at one point in 1850 where he does a thought experiment: imagine if slavery had been abolished everywhere at the time of British abolition. And he says, “Imagine this: no cotton. No sugar. Little coffee, less tobacco.” He makes the world sound really bleak without slavery. He’s this sort of rumpled, conservative, country-born Virginian, but he has this global perspective.

That global perspective really enforces their confidence about slavery’s place at the heart of the world economy. All these industrializing societies are buying more and more slave goods. Slave societies look like they are outpacing the emancipated societies, which are less productive from a pure export perspective because they’re not coercing the workers as directly.