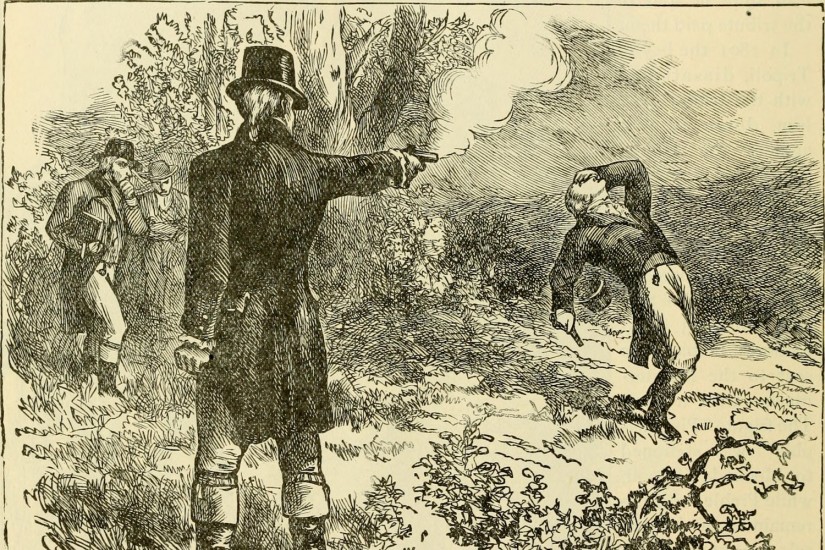 Duel between Aaron Burr and Alexander Hamilton from &#34;Our Great Country&#34; by Henry Davenport Northrop (1901).
Library of Congress

It’s become a fad in the so-called resistance to Trump to project on the American founding generation not mere wisdom and judgment but the gift of prophecy. “220 Years Ago George Washington Warned Us about Trump,” reads the headline for an article in “The Hill,“ a good example of its type. Drawing on the famous farewell speech, the article concludes that our first president had “his inner eye” on our current president.

Nobody has taken this brand of pseudohistorical silliness farther than Peter Daou, a prolific Clinton supporter and busy social-media personality. According to Daou, Alexander Hamilton too gazed into the future and saw a vision of the 2016 election. Many, many times now, Daou has reported on Twitter how gobsmacked he was to discover Hamilton’s predicting, in 1792, that “the only path to a subversion of the republican system of the country is by flattering the prejudices of the people, and exciting their jealousies and apprehensions, to throw affairs into confusion, and bring on civil commotion.”

As if that weren’t mindblowing enough, in the crystal ball appears a figure so horribly familiar that Daou calls the epiphenomenon chilling: “When a man unprincipled in private life,” Hamilton goes on,

"desperate in his fortune, bold in his temper, possessed of considerable talents. . . — despotic in his ordinary demeanor — known to have scoffed in private at the principles of liberty — when such a man is seen to mount the hobby horse of popularity — to join in the cry of danger to liberty — to take every opportunity of embarrassing the general government and bringing it under suspicion — to flatter and fall in with all the nonsense of the zealots of the day — it may justly be suspected that his object is to throw things into confusion that he may “ride the storm and direct the whirlwind.”"

But it’s only sort of real, and the quotation’s slipperiness illustrates the futility, for any real resistance to the current presidency, of this “wowza!” brand of founder-worship. Clipped misleadingly out of Hamilton’s “Objections and Answers,” where the secretary was responding, with some understandable heat, to a barrage of criticisms of his policy and aims, the passage has been edited to remove a term contradicting the supposed profile of Trump — the ellipses in the big section replace “the advantage of military habits” — as well as some material exposing the author’s not always edifying tactics for self-defense. Many of Hamilton’s contemporaries and forebears took precisely the line expressed in the quotation — pandering to a misguided populism is a dictator’s means of overthrowing a republic — and employed similar language when attacking, on that basis, political enemies who were attacking them.