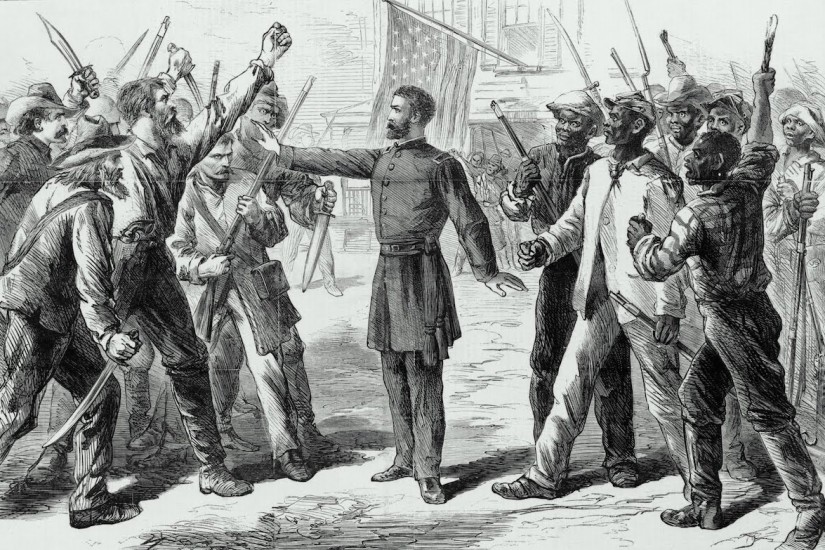 The most bitter attacks on the Freedmen’s Bureau were aimed not so much at its conduct or policy under the law as at the necessity for any such organization at all. Such attacks came naturally from the border states and the South, and they were summed up by Senator Davis, of Kentucky, when he moved to entitle the act of 1866 a bill “to promote strife and conflict between the white and black races ... by a grant of unconstitutional power.” The argument was of tremendous strength, but its very strength was its weakness. For, argued the plain common sense of the nation, if it is unconstitutional, unpracticable, and futile for the nation to stand guardian over its helpless wards, then there is left but one alternative: to make those wards their own guardians by arming them with the ballot. The alternative offered the nation then was not between full and restricted Negro suffrage; else every sensible man, black and white, would easily have chosen the latter. It was rather a choice between suffrage and slavery, after endless blood and gold had flowed to sweep human bondage away. Not a single Southern legislature stood ready to admit a Negro, under any conditions, to the polls; not a single Southern legislature believed free Negro labor was possible without a system of restrictions that took all its freedom away; there was scarcely a white man in the South who did not honestly regard emancipation as a crime, and its practical nullification as a duty. In such a situation, the granting of the ballot to the black man was a necessity, the very least a guilty nation could grant a wronged race. Had the opposition to government guardianship of Negroes been less bitter, and the attachment to the slave system less strong, the social seer can well imagine a far better policy: a permanent Freedmen’s Bureau, with a national system of Negro schools; a carefully supervised employment and labor office; a system of impartial protection before the regular courts; and such institutions for social betterment as savings banks, land and building associations, and social settlements. All this vast expenditure of money and brains might have formed great school of prospective citizenship, and solved in a way we have not yet solved the most perplexing and persistent of the Negro problems.

That such an institution was unthinkable in 1870 was due in part to certain acts of the Freedmen’s Bureau itself. It came to regard its work as merely temporary, and Negro suffrage as a final answer to all present perplexities. The political ambition of many of its agents and protégés led it far afield into questionable activities, until the South, nurturing its own deep prejudices, came easily to ignore all the good deeds of the Bureau, and hate its very name with perfect hatred. So the Freedmen’s Bureau died and its child was the Fifteenth Amendment.

The passing of a great human institution before its work is done, like the untimely passing of a single soul, but leaves a legacy of striving for other men. The legacy of the Freedmen’s Bureau is the heavy heritage of this generation. Today, when new and vaster problems are destined to strain every fibre of the national mind and soul, would it not be well to count this legacy honestly and carefully? For this much all men know: despite compromise, struggle, war, and struggle, the Negro is not free.