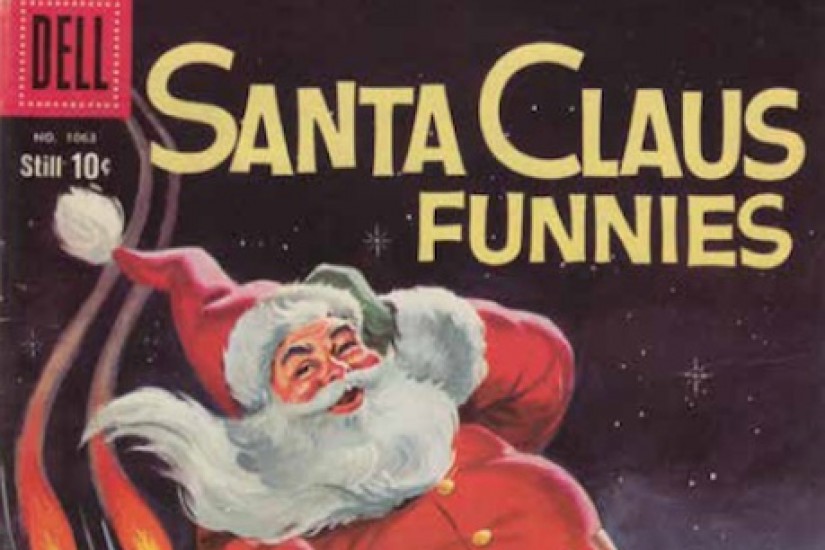 Santa ditched his sleigh for a rocket ship in the 1950s, as seen on the cover of Dell’s December 1959 “Santa Claus Funnies.&#34;
Western Printing & Litho Company

When I was kid in the 1980s, I assumed everything I knew about Christmas had existed since the beginning of time. So it was strange to grow up and realize that only 10 percent of my concept of Christmas came from ancient history—the story of Jesus’ birth, the myth of a winter gift-giver leaving treats in footwear, and the transposing of the Nativity story onto pagan traditions such as putting up an evergreen tree. Another 30 percent of my Christmas beliefs were just 160 years old, specifically, the story of a heavyset man in a fur-trimmed suit who made wooden toys in a North Pole workshop year-round and then, on Christmas Eve, traveled the globe on a reindeer-led sleigh, sliding down chimneys and putting presents into stockings.

In fact, the majority of the Christmas traditions I feel nostalgic for were created very recently, just after my parents were born—everything from the warm Bing Crosby songs, the blow-mold light-up Santas, and the starburst ornaments to the competitive outdoor light displays and the base of the tree piled with mountains of gifts wrapped in shiny, patterned paper and bows. This is the Christmas most of us still experience today, a relatively new phenomenon, mostly conceived and codified in the wake of World War II.

The invention of modern-day Christmas and all its shimmering accoutrements are explored in Sarah Archer’s new book, Mid-Century Christmas: Holiday Fads, Fancies, and Fun from 1945 to 1970. Over the phone from Philadelphia, Archer shared with me how the Santa Claus myth was adapted in the 1950s to soothe Cold War fears about space travel and nuclear weapons, as post-war prosperity led to an explosion of Christmas consumerism and a retreat into traditional gender roles. She also explained how we ended up with aluminum trees, cellophane craft projects, a televised Yule log, and “A Charlie Brown Christmas.”