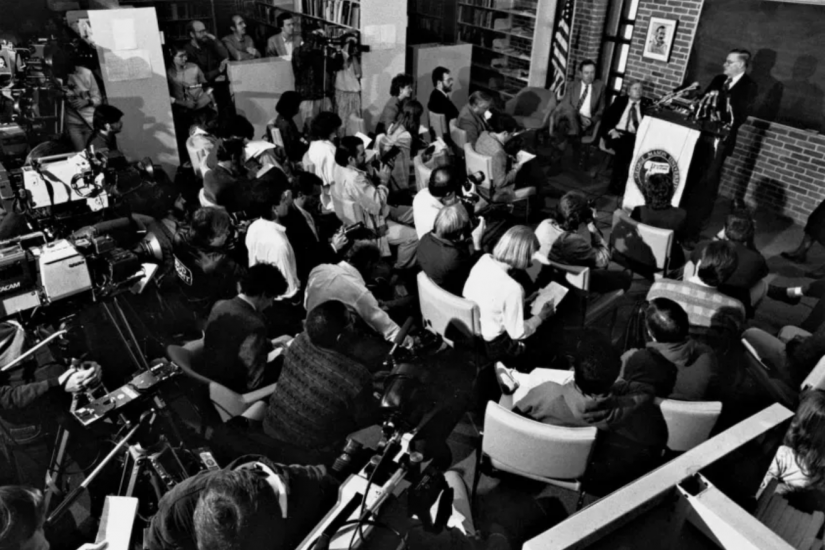 But despite its flaws, MacLean’s book makes two important interventions in the literature on the rise of the right. The first is that, by showing the various points of contact between free-market intellectuals and those organizing in opposition to the civil-rights movement, Democracy in Chains brings the Southern context of libertarian ideas to the forefront. Going back to George Nash’s 1976 intellectual history of American conservatism, most treatments of right-wing thinkers in the 1940s and ’50s say little about the opposition to desegregation, giving the impression that it was an unsavory product of shadowy grassroots groups like the Ku Klux Klan that has little to do with libertarian thought. But MacLean’s book shows how difficult it is to separate race from the history of the free-market right. She highlights how the work of thinkers like Buchanan echoed common arguments being made by anti-integration journalists and legislators and how, in turn, those opponents of civil rights then used his and other libertarian arguments to further their cause. Where other intellectual historians of the right have focused on the intent of the thinkers and the content of their work, MacLean’s emphasis is on how Buchanan’s ideas were used. This leads her to tell a story about the history of free-market conservatism that is very different from what libertarians tell themselves, which is likely one reason that her book has become such a lightning rod for the right.

Her book’s second contribution is in some ways more complex: It is a question and a provocation more than an answer. By exploring the role played by the Kochs and others in financing various centers of intellectual and political activity, Democracy in Chains raises the question of how historians should approach and write about right-wing efforts to reshape political ideas. How can historians write about business activists such as the Kochs without overstating their influence? They may have believed they had a “master plan,” but how can we offer accounts of them without taking them at their word and making them appear all-powerful?