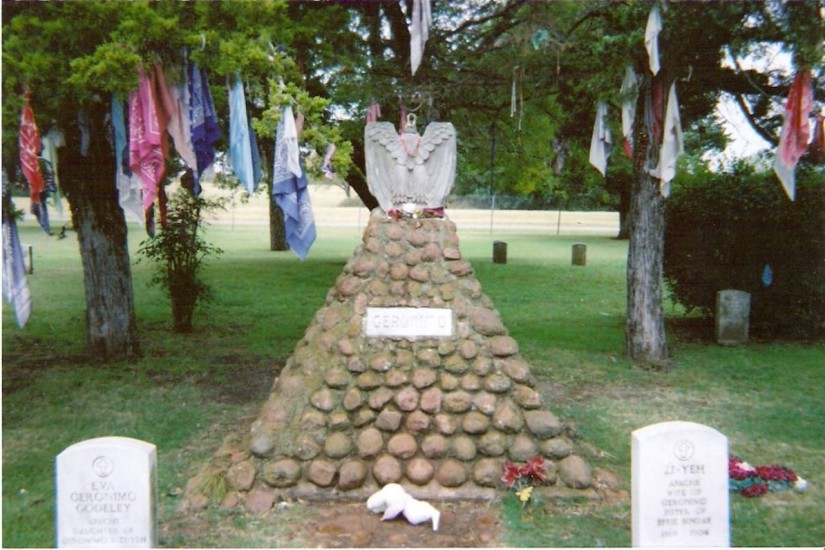 On a Monday in early August I find myself spooning soil from Geronimo’s grave at a prisoner of war cemetery in Oklahoma into a double ziplock bag I bought at Target. I will carry this soil, by car and bus, to Guachochi, a provincial Mexican town in the Sierra Madre Occidental. There, three Mexican sisters who recently traced their ancestry to this famous Apache medicine man are about to hold a Ceremonia del Perdón—a Ceremony of Forgiveness. The soil is my gift to them.

Geronimo’s grave is inside Fort Sill, a US army base, so I must first stop at the visitor center to obtain a pass. The United States staked out Fort Sill in 1869, as a staging ground for punitive raids against the Native Americans who had survived deportation to Indian Territory, but its visitor center bears the ubiquitous hallmarks of US military efficiency that scream temporariness: insulated white metal wall panels mounted on a concrete foundation and facing a parking lot paved with ankle-breaker gravel. I have seen structures and parking lots exactly like this on American bases in Iraq and Afghanistan; I imagine many of those are now gone. Inside the visitor center, a jovial military policeman hands me a Form 118a, Request for Unescorted Installation Access to Fort Sill. This is to ensure I am not a terrorist. I enter my full name, date of birth, driver’s license number, social security number, gender, race. Under “purpose of visit” I check “other.”

The Beef Creek Apache Cemetery was established in 1894, the year Geronimo and a band of 341 other surrendered Chiricahua Apaches were transferred from a prisoner of war camp in Florida to Fort Sill under military escort. Here, in the foothills of the Wichita Mountains, the Apache man’s campaign against white colonists came to an end. It had begun in 1851, when Mexican soldiers massacred more than a hundred women and children in Geronimo’s encampment, among them his mother, his first wife, and all three of his young children.

At Beef Creek, rows of identical upright headstones of white marble poke out of a manicured sloping field of green; think Arlington Cemetery minus the color guard. Among this impersonal personal misery, Geronimo’s tomb is a pyramid of granite boulders about five feet tall topped with a stone eagle. A small grove of white hibiscus and fragrant abelia sets it slightly apart from the rest of the graveyard.

Before I knelt to scrape topsoil from the grave, it had been desecrated at least twice. Less than a decade after Geronimo died in 1909, of pneumonia but ultimately of humiliation and drink that followed his imprisonment, members of Yale’s Skull and Bones—among them, allegedly, Prescott Bush, grandfather of President George W. Bush—dug up his corpse, cut off his head, and brought the skull to the society’s headquarters in New Haven. A hundred years after his death, Geronimo’s descendants in the United States lost a federal suit to repatriate the skull under the Native American Graves Protection and Repatriation Act of 1990. Since that ruling, I now see, someone has beheaded the stone eagle on the tomb.