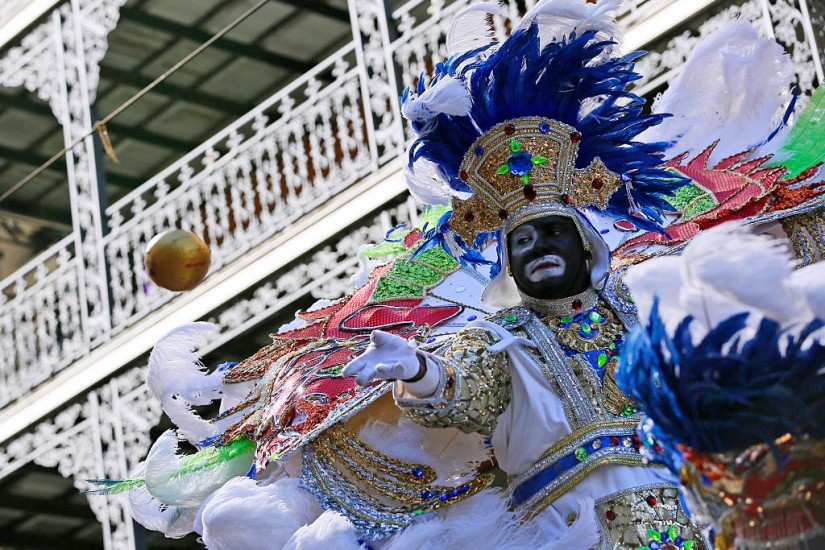 A member of the Zulu Social Aid and Pleasure Club participates in a Mardi Gras parade in New Orleans (2016).
Jonathan Bachman/Getty Images
…

At the very crux of Mardi Gras–especially during the nineteenth century–was the reaffirmation of white dominance and efforts to suppress or curtail Black rights.

Take the case of certain 1873 parades in which the themes, costuming of krewes, and the imagery incorporated on floats and elsewhere sought to inscribe and reinforce white supremacy and southern (white) nobility. Through performative gestures and public displays, participants opposed a postbellum Reconstruction era and protested rights extended to African Americans in the Fourteenth and Fifteenth Amendments, which extended citizenship to Blacks and enfranchised African American men (in theory when not always in practice), respectively. The deep segregation and exclusionary practices of the krewes strategically intended to reinforce racial, social, class, and gender hierarchies “through various dynamics implemented and constructed to continue to ascribe power to (elite) white men in New Orleans.” Some early parades reflected a vector of social and political discordance in the city and the state generally. It was not until 1992 that New Orleans passed legislation to desegregate Mardi Gras krewes, which remained largely or exclusively white with the exception of a few Black krewes founded in a complicated response to segregation and discrimination.

The Zulu Social Aid and Pleasure Club, one such organization, originated in the early 1900s. The majority of its members belonged to a Benevolent Aid Society (one of the few options blacks had for financial aid and assistance during illness, with burials, etc.) as early as 1901. In 1909, Zulu made its first public appearance on parade routes. And an appearance is precisely what they made. They initially dressed in “raggedy pants” and attire, but eventually adopted their signature look: grass skirts, blackface, bushy wigs or hairstyles, and exaggerated aesthetics (later including more elaborate, ornate head gear). Such attire was ostensibly a subversive, revolutionary gesture to putatively mock white-created caricatures of Black identity, including blackface minstrelsy. Their costuming simultaneously embraced Black identity, connecting them to the Zulu of continental Africa in ways that elevated darker skin tones and shades of Blackness in a color-conscious New Orleans. Colorism – whether in the form of brown paper bag, blue vein, or fine-tooth comb tests – further excluded from Black organizations or societies those who were not multiracial Creoles, fairer-skinned, or Black elites.

In this regard, Zulu and other Black krewes created and offered a space of belonging during the racial politics of the era. Some have challenged the appearance and costuming Zulu donned as stereotypical exaggerations of racist iconographies and caricatures of Blackness, or as offensive blackface.