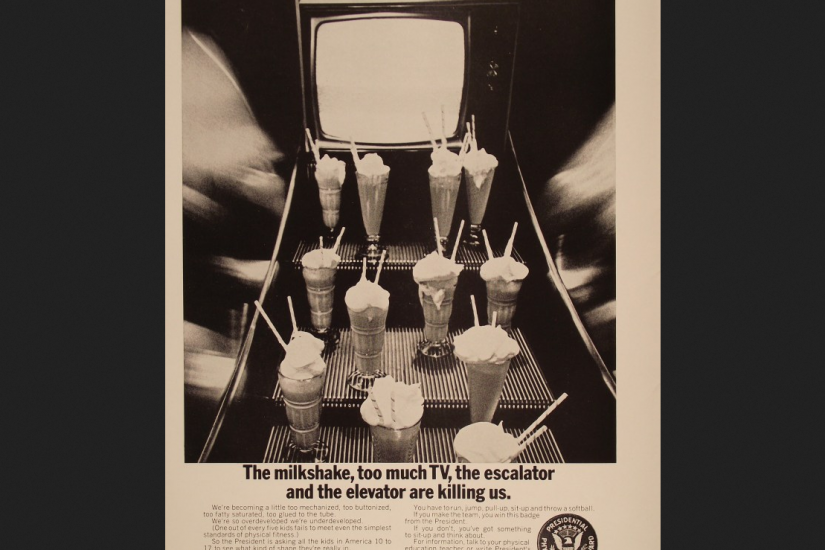 A public service announcement of the PCPF/Ad Council from the late-1960s.
…

The tension between a strong belief in the need for improved male physique and an equally strong belief in promoting male autonomy and independence led to the strange form taken by postwar fitness policy. Wilkinson, for instance, worried that American boys would not be as fit “as the Russians who will challenge them in the years to come.” He decried the poor stamina and “flabby muscles” of American youth, and complained that key American values like vigor, sacrifice, and work were emphasized less and less. At the end of World War II, the Federal Security Agency argued that “Japan would not have dared attack us if she had not known of our physical softness and lack of fitness.” General Lewis B. Hershey, director of the Selective Service System, declared Americans were, “a Nation of Weaklings.” Manly American strength would protect the nation, and would be critical to any lasting postwar peace, these leaders suggested. When aggressive solutions like Universal Military Training were floated, however, they proved too at odds with postwar norms to implement.

Instead, the market-oriented and voluntary President’s Council on Physical Fitness was meant to fill the void. In the first year of the active PCPF and Ad Council partnership, they placed ads with more than 600 newspapers, 650 television stations, and 3,500 radio stations. These spots were designed and placed by the Ad Council, especially relying on the advertising firm Young and Rubicam. In 1963 the President’s Council reported that it had used 15 million dollars of advertising “at no cost to taxpayers.” With the organizational support of the Ad Council and the financial support of the Equitable Life Insurance Company, the President’s Council even released a film. Youth Physical Fitness: A Report to the Nation included appearances by Gene Kelly, Bob Hope, Alan Shepard, and, of course, John F. Kennedy. The film reached an audience of more than 84,000 citizens who saw it on the big screen, and another three million who saw it during one of the film’s ninety television screenings.