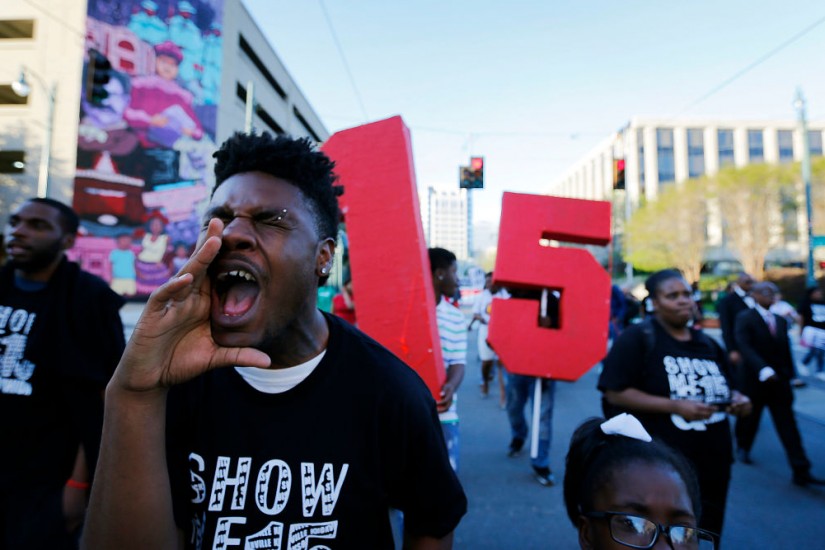 Jerelle Minor marches with supporters of the Fight for $15 movement on April 4, 2017 in Memphis, Tennessee.
Mike Brown/Getty Images

It was 50 years ago today that two black sanitation workers in Memphis were crushed to death on the job. Soon after, hundreds of their brothers went on strike demanding the recognition of their union and fair pay, and to assert their own basic humanity. The strike commanded the attention of the nation and became a driving force of Martin Luther King’s Poor People’s Campaign.

Standing with working people fighting for a strong union was King’s final public act before his assassination. “We’ve got to give ourselves to this struggle until the end,” he told the sanitation workers the night before he was shot dead.

Each day of the two-month 1968 strike, workers marched from Clayborn Temple to Memphis city jall. They stared down mace and teargas, police dogs and the barrels of shotguns, all while wearing signs that proudly declared: “I AM A MAN.”

On Monday, on the 50th anniversary of the strike, some of those strikers will march that same path again, alongside thousands of fast-food workers across the mid-south who are walking off their jobs demanding $15, union rights and respect on the job, regardless of race.

We’ll be part of that march. One of us is an original Memphis striker, who listened to King give his famous “Mountaintop” speech the day before his death, and who works for the Memphis sanitation department to this day. The other is the daughter of a St Louis sanitation worker who works at McDonald’s to support her sons and hold on to her family home.

The fast-food workers in the Fight for $15 striking today are making the same demands sanitation workers made 50 years ago – higher pay, the right to a union, and dignity on the job. At the time, sanitation workers weren’t paid enough to support our families and we were treated as less than human by our bosses. We needed change and so we decided to go on strike.