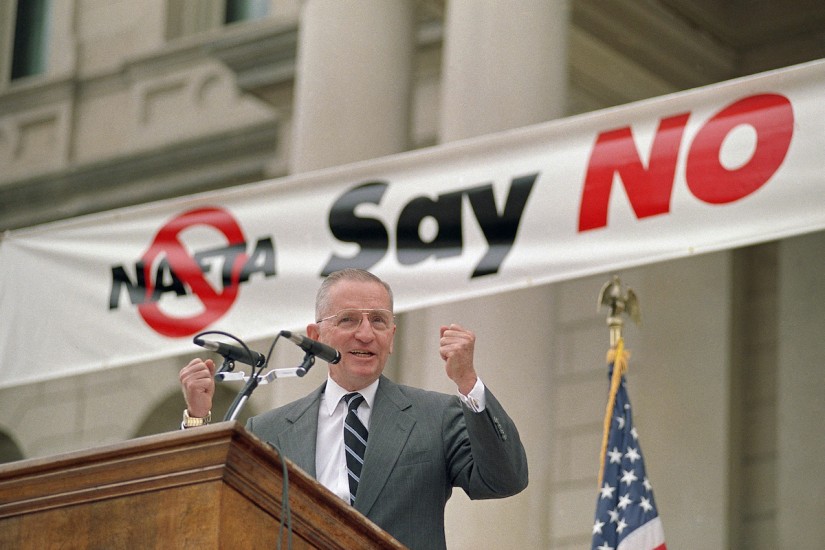 Ross Perot addresses thousands of people at the “No To This NAFTA” rally on the steps of the state Capitol in Lansing, Michigan, Sept. 18, 1993.
AP/Lennox McLendon
…

However, the most significant challenge to a corrupt campaign finance system and trade liberalization came from outside the two-party system altogether, when a diminutive Texan tech billionaire financed a campaign to elect himself President. Unlike Buchanan or Brown, Ross Perot was indifferent to the struggles over cultural representation then raging; political economy was his primary concern, and his opposition to federal deficits, corporate lobbyists on Capitol Hill, and, above all, NAFTA comprised the entirety of his appeal to voters. This appeal was formidable: by mid-June Perot had risen above Bush and Clinton in a national poll, scoring 37 percent while the party nominees mustered 24 percent each.

Perot was not a natural politician and he did not run a perfect campaign. His command of his organization, staffed largely by major-party defectors whose loyalty he suspected (probably correctly), was shaky, and he refused to spend large sums of money on television commercials in an era when television dominated. Most damaging, Perot dropped out of the race during the vital ten-week period between mid-July and October, alleging that Republican Party operatives were blackmailing him by threatening to leak nudes of his daughter prior to her wedding. Whatever momentum he regained in the final campaign month during the televised debates between himself, Bush, and Clinton (Perot was a keen debater) was dwarfed by the momentum he had sacrificed by leaving the race.

Given the magnitude of his support and the potential he had displayed, Perot’s platform could not simply be dismissed. His plan combined backing for balanced budgets, term limits, cuts in domestic spending, tax increases on the wealthy, and heavy federal investments in infrastructure and education, but its core element was Perot’s adamant insistence on protecting American manufacturing jobs from outsourcing to nations with lower wages, weak workers’ rights and labor movements, and nonexistent environmental regulations. Yet despite his errors, which were seized on by a political press eager to declare him unelectable, Perot still drew in 18.9 percent of the vote on Election Day, a figure no third-party candidate had surpassed since 1912, when Theodore Roosevelt won 27.4 percent running as a Progressive.

Like Roosevelt, Perot was possessed of a firm belief that the federal state should be empowered to mediate between capital and labor at home and promote economic nationalism abroad. Yet American circumstances had altered over eighty years: the nascent industrial titan of 1912, backed by unparalleled economies of scale, found itself in 1992 saddled with an aging manufacturing sector and struggling to maintain market share against its more efficient Japanese and German vassals. After the ’70s, when the tremendous expenses of the Vietnam War, two successive oil shocks, and a global crisis of industrial overproduction drove the rate of economic growth and the return on capital investment down to minimally profitable levels, firms in the First World were eager to relocate industrial enterprises to the Third, where poverty and low wages permitted greater profit margins. Outsourcing would also corrode the bargaining power of organized industrial labor in the developed world: even in a post-Soviet era, unions in the democratic West remained potential strongholds of resistance to capital. A labor movement already beleaguered by a business counteroffensive in the ’80s—its opening salvo Reagan’s mass firing of striking air traffic controllers in 1981—could be dealt a crippling, possibly fatal blow in the ’90s by trade agreements such as NAFTA, which not only facilitated the outsourcing of American industry but also, almost as importantly, referred adjudication of corporate trade violations to international bureaucratic tribunals beyond the reach of democratic accountability.

But under liberal democracy the trade agreements first had to be approved by an elected legislature and elected executive before becoming law. As President Clinton, picking up where Bush left off, prepared to push NAFTA through Congress, Perot became the center of a resistance to the treaty which included Pat Buchanan, Jesse Jackson, Ralph Nader, and above all organized labor.