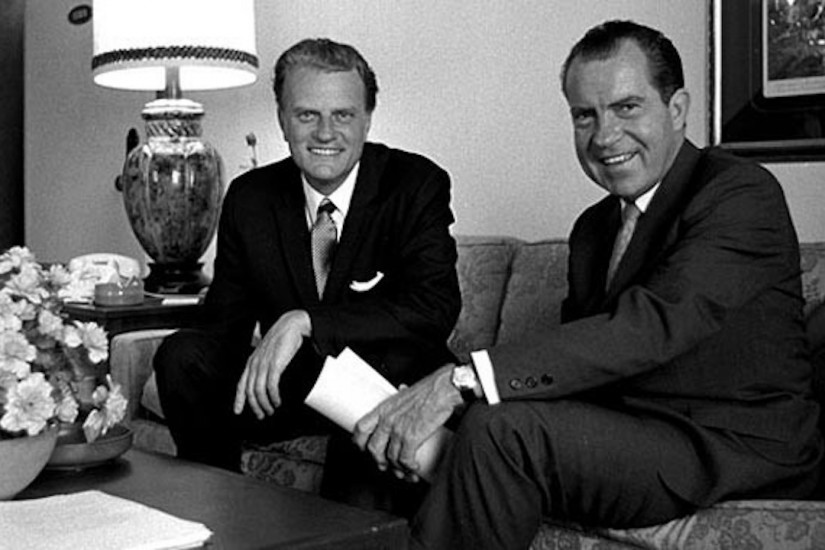 Of all the religious rites and rituals launched in the Nixon administration, the most remarkable was the new practice of church services held inside the White House. “I’ve never heard of anything like it happening here before,” White House curator James Ketcham told Time. The semi-regular services took place in the East Room, a showcase space noted for its sparkling chandeliers and gold silk tapestries. Instead of pews, oak dining room chairs with seats of yellow brocade were arranged in rows of twenty. A piano and an electric organ, donated to the White House by a friendly merchant, were positioned at the north end of the room, with space to the side for a rotating cast of choirs to perform. Between them stood a mahogany podium where the president and the “pastor-of-the-day” would make remarks.

Naturally, Billy Graham presided over the initial White House church service, held the first Sunday after the inauguration. As worshippers entered the East Room, they picked up liturgical programs, adorned with the official presidential seal, and found their way inside, while a Marine master sergeant played soothing hymns on the organ. Soon, every one of the 224 seats in the room was taken, with two thirds of the Cabinet and several senior staffers on hand; still more stood at the rear. As large portraits of George and Martha Washington looked on, Nixon strode to the podium, welcomed the assembled to “this first worship at the White House” and invited up his “long-time personal friend.” Graham graciously returned the compliment, using the president’s inaugural address as the basis for his remarks. He urged the country to heed Nixon’s warnings about the “crisis of the spirit” that was sweeping across college campuses and asked God to guide the administration as it dealt with that problem and others. When the service concluded, White House waiters ushered guests into the State Dining Room for coffee, juice and sweet rolls. As they went, they passed through a receiving line made up of Nixon, Agnew, Graham and their wives. Shortly after, Graham and the Nixons posed for photographers on the north portico. A delighted Chief of Staff Bob Haldeman raved about the day in his diary: “Very, very impressive.”

Some outside the White House were less impressed, denouncing the services as crassly political.